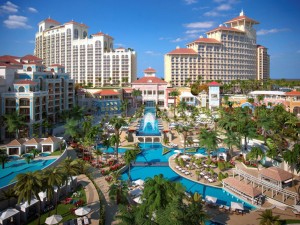 We’ve done a few travel articles here at the official DaLuca blog, but never have we hyped a soon-to-be-opened megaresort in the Bahamas. Buckle up, otherwise this place just might blow you away.

A megaresort, by definition, is (predictably) a resort of extensive size that usually incorporates a number of different attractions and amenities in order to provide their guests with a vast array of potential leisure. Today we are going to be looking in on a new megaresort in the making… Baha Mar.

Baha Mar (just sounds ravishing, doesn’t it?) is a $3.5 billion dollar megaresort that is currently in production on the Bahamian island known as New Providence. The company is owned by Baha Mar Resorts Ltd. and is managed by its CEO Sarkis Izmirlian. The resort is designed to include four seperate hotels with 2200 rooms, 307 residencies, a 100,000 square foot casino (with its own hotel and somewhere around 1500 slot machines), a 30,000 square foot spa and a special golf course designed by esteemed professional golfer Jack Nicklaus. The place is going to be monolithic at least and the world is already watching as its opening day approaches… Which will be sometime in the spring of 2015.

Originally the resort was planned to be opening its grand doors somewhere in the winter of this year, but the grandiosity of the place caused some minor setbacks, forcing the resort’s public coming out to be postponed. Recently the Senior Vice President of Administration and External Affairs for Baha Mar commented that since the minor hiccups of the place have been rubbed out that everything has been running in an exemplary and orderly fashion. According to him, “everything remains normal” at the soon-to-be megaresort, and for any potential and aspiring visitors to this grand location that comes up and on as incredibly good news. Anticipation has been running high since the plans for the resort were initially unveiled and it’s wonderful to hear that this project hasn’t been stalled or cancelled like so many other hotel and resort projects in the last few years.

The resort if planned to open up in stages from December to the grand opening date (sometime in late spring), although no word has been passed down as to which portions of the resort will be opening in which stage. As the deadline to opening excitedly looms a few months out, the company has stated that at this time they are attempting to determine which areas will be opened to the public at which times and how to best celebrate their grandest of openings. They also want to have the majority of that info to the public sometime in October.

The Senior Vice President also made clear how badly Baha Mar wanted to get the visitor experience right on the first try, emphasizing that all 4,000 of the resorts employees (and of course management like himself) will be spending the next 6 months actively preparing this exotic empire for its first moments in the sun.