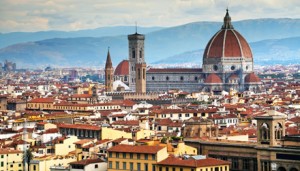 Throughout last week we here at the DaLuca blog have been taking a gradual historical journey through the existence of Officine Panerai’s hometown, Florence, Italy. We’ve learned about everything from it’s creation up to today and that’s what today is all about, what the modern day city of of Florence is all about.

During the 19th century, the population of Florence exploded in quantity, and doubled over the course of it. Then, in the 20th century it tripled. Tourism, trade and various financial services all helped the city to move down this bustling, prosperous path quite easily. This led to an even greater outburst of creative outpouring from a number of artists resulting in the establishment of even more museums.

During the greatest conflict in history (WWII), Florence had the unfortunate privilege of experiencing German (aka: Nazi bastard) occupation from 1943-1944. To add to the misfortune of the times, on September 25th, 1943, at the height of the German occupation, Allied bombers targeted the center of the city leveling many historic structures and tragically killing 215 civilians.

As the war turned on Germany, her troops began to pull themselves from the embattled city of Florence. Florence was declared an “open city” which prevented it from receiving further wartime damages, but it wasn’t her only problem with the German’s still within her walls. Right before they departed in retreat the Germans meticulously murdered anyone left in the city who they continued to be opposition to their beliefs and goals. They also detonated explosives under a number of bridges along the Arno which had been linking the district of Oltrarno to the main hub of the city. This made it much more difficult for the incoming British troops to cross into the city. Interestingly, Adolf Hitler specifically demanded that the Ponte Vecchio NOT be blown to bits due to the fact that it was too beautiful… But that didn’t stop the nazis from using mines to cripple many other equally historic pieces of the city on their way out. The war ended and the people of Florence rebuilt. Not even the greatest war in history could keep this now not-so-little city down.

Ever since then the city has been in a constant state of construction, with projects handling both reconstruction, upkeep and the creation of various new public wonders. in 2002 the city played host to the European Social Forum and in 2011 the city celebrated the 150th anniversary of the Italian unification.

It’s no surprise that Officine Panerai was born out of all of this historical turmoil and defiant struggling, as the hardest diamonds are only created under the highest pressure. Officine Panerai is renowned worldwide and for damn good reason. Is it any wonder why such a stalwart and proven company is revered by so many?