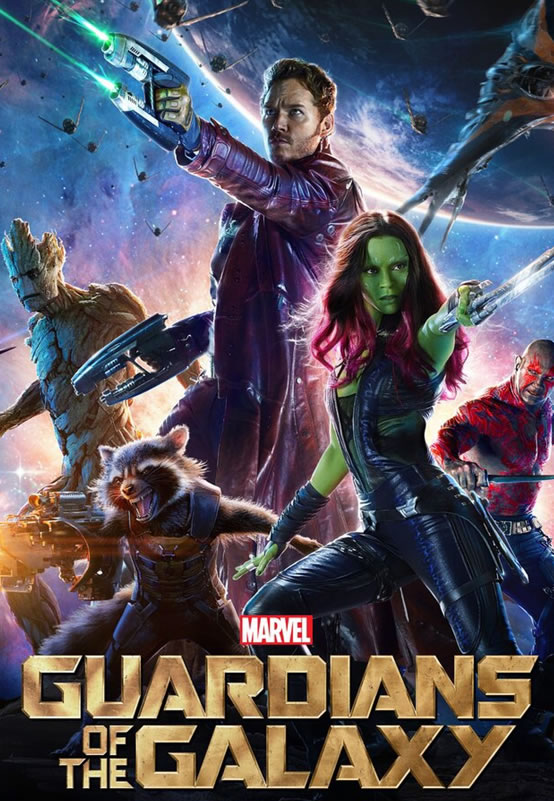 So let's recap movie 1 to get ready for movie 2.

In the beginning of the movie Peter Quill starts out on earth watching his mother die when he is overwhelmed with emotions and runs out side in a panic. He is immediately kidnapped by a space ship.

The movie then transitions to adult Peter Quill, or as he calls himself, Star Lord. He is on the planet Morag looking for a mysterious round object. It is an amazing opening sequence. He is listening to a Walkman with all the best 80s songs. You can hear what he is listening to as he navigates through this peculiar planet with its funny little creatures. He eventually finds the object only to be discovered by an enemy, Korath. There is a shootout and Star Lord escapes on his ship.

After the crazy maneuvers he uses to make his escape, a girl on his ship is awoken. Peter seems to have completely forgotten she was there and her name. His boss/kidnapper Yondu calls him and Peter decides he is not giving him the mysterious object after almost losing his life over it and is going to sell it himself.

He flies to plant Xander to drop the girl off and try to sell the object to a broker. However, the broker won't take the object as Korath who was fighting Peter on Morag is a goon of Ronan and the broker is terrified of Ronan. Peter goes outside to get some fresh air and flirts with a girl who is another of Ronan's goons, Gamora, except she really isn't a goon anymore and is trying to steal the object to keep it away from Ronan and get enough money to restart her life. In her attempt to steal it she passes by Rocket Raccoon and Groot, both bounty hunters, who see Peter who has a bounty on him. They then try to capture him and through all the ruckus they’re seen by the police and sent to a space prison called Kyln.

In prison everyone wants to kill Gamora because she is a daughter of Thanos and people still believe she is a Ronan goon. There is a bluish green guy with red symbols all over his body named Drax who wants to kill Gamora because Ronan killed his family. Gamora explains that she isn't a Ronan goon and was planning on getting the object to sell to spite him and to have enough money to get away from him. Peter is convinced and helps her.

Peter, Rocket Raccoon, Groot, Gamora, and Drax team up to escape prison and sell the round object and split the proceeds. Except Drax who is not in it for the money, but is hoping it will draw out Ronan and he can kill Ronan as revenge.

Rocket Raccoon makes an escape plan where everyone has to get an item. They all get the items Rocket Raccoon said he needed for his escape plan. They all make it to the top of the guard station and with everything Rocket needs they escape. However before they make a clean get away Peter goes back for his Walkman and then the escape.

On their way to sell the object they argue and find out they really don't like each other. They arrive at where they are going to sell the object. It's a space station of sorts built in the decapitated head of a god. It's called Knowhere. While waiting to meet with the man they are going to sell the object to, Peter let's Gamora listen to his Walkman and explains that the mixed tape in there is from his mom. He then tries to dance with her and flirt with her but she quickly puts a stop to that. Meanwhile Drax, Groot, and Rocket are getting drunk and gambling. They get in a big fight and Drax walks away from the group and makes a call.

The group, minus Drax meet with the buyer a man that calls himself the collector. He has many things in his collection from the marvel universe. They hand him over the object where he opens it revealing infinity stones. He tells them the history of the stones and how they are all powerful and can be used to destroy planets. The collector's assistant tries to steal the stone and just by touching it destroys her and blows everything up. Peter, Gamora, Rocket, and Groot close the object with the stone inside and make it their mission to give the stone to Nova headquarters as they don't want it falling into the wrong hands. 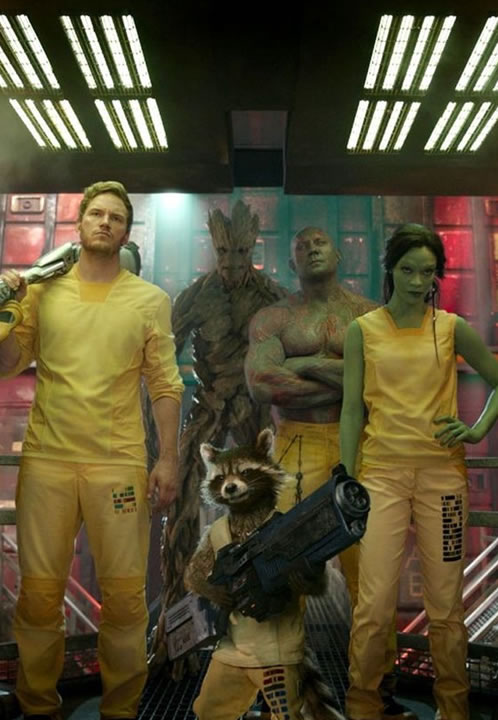 Now, let's look at the awesome leather jackets Star Lord wears and what Da Luca products would look good with the them.

This is the long jacket that Star Lord is wearing at the beginning of the movie. It has a beautiful reddish brown color and nice amount of shine. The coat is long, but still sporty so I would pair it with a Da Luca Shell Cordovan 2- piece strap in color 4 and leave the edges raw to self-burnish over time. I'd also get a custom snap wallet in color 4 to match.

In this picture he is wearing a shorter version of the previous jacket. It’s the same coloring, but a lot more casual. I would pair it again with the color 4 shell cordovan, but instead of a 2-piece strap I would go for a more casual NATO Strap. I would also pair it with a custom angle wallet in color 4.

Now this is all good except you would rather look like Gamora.

I think we are all ready now for Guardians of the Galaxy 2 to come out, as it can’t come soon enough!