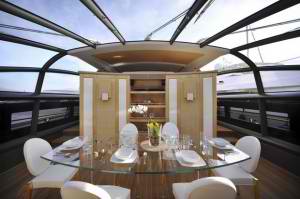 Some men ride motorcycles. Some men fly planes. And some men conquer the seas in gold-plated $4.5 billion dollar yachts. I’m not even kidding.

The most expensive yacht in the history of our menial existence is called (funny enough) the History Supreme. Owned by an anonymous businessman, the History Supreme is dripping with decadence from bow to stern and is an undeniable testament to the thought that maybe… Just maybe money can provide some sort of sea-faring happiness to the billionaire sea captain in all of us.

As mentioned above, the entire yacht is gold plated. Just look at the thing. Any bystanders would have their jaws hit the floor after even a glimpse of this thing. It’s probably safe to assume that the title of “World’s Most Expensive Yacht” isn’t going to be usurped anytime soon, especially when you take into account the fact that the former holder of this outrageous honor was only worth $450 million. Yes, History Supreme is worth almost ten times as much as the record holder before it. Russian billionaire Roman Abramovich (the owner of the former record holder, Eclipse) must be weeping somewhere at his luxury yacht’s utter outdoing. It’s okay, though, Roman. Eclipse has its own missile defense system, and is about the only thing that it has that History Supreme isn’t boasting.

History Supreme took over three years to complete and was designed by famed jeweler Stuart Hughes, who called the project a “mammoth” undertaking. It took 100,000 kilograms of gold and platinum to complete the project and that’s just the beginning of what all this floating jewel is equipped with. Here’s the rundown on its rumored amenities.

The hull of the ship, its exterior design, dining area, railings and even its anchor are all coated with only the precious metals on earth. The owner of this yacht may seriously be dragging a hunk of gold around the bottom of the seafloor worth more than the average person’s house.

So far these are all just rumored accessories to this remarkable creation as nobody has been able to actually board it yet and actually confirm any of these insanely expensive bits and pieces. For now, the public will just have to wait with mouths agape to someday maybe find out what all is really below decks of this superior oceanic vessel.