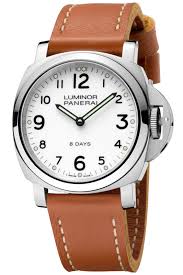 It’s Tuesday, and if you follow our blog here at DaLuca you know that on both Tuesdays and Thursdays we take our chance to showcase certain Officine Panerai products that our followers may be particularly interested in, and today we are investigating a Panerai timepiece known as the Luminor Base 8 Day Acciaio.

First we’ll hit you with the basic facts about this watch and then we’ll get into the further details of the thing.

When it comes to movement descriptions, nobody can better describe their own product than Panerai. This is what the brand has to say about the movement of the Acciaio:

The watch has functioning hour and minute hands and the case is 44mm and is made of polished steel. Its bezel is made from the same material. Meanwhile, the back of the case is made from see-through sapphire crystal. Panerai’s trademarked crown protection device is made of brushed steel, and the dial is black with luminous Arabic numeral and hour markers. The watch is water resistant at up to 300 meters and the watch ships with a personalized leather strap with a polished steel buckle.

Cold hard facts down, now let’s get personal with this piece.

Up until the 1990’s Officine Panerai had mainly catered to the naval forces of their home country and the odd aquatically inclined watch enthusiast. It was in this decade however that the company decided to broaden their market by appealing to us average civilians. To do so, they released a collection of three limited edition watches on the international market.

Panerai and watch enthusiasts in general leapt at the offering with gusto and the brand became readily available to the average watch fanatic. What case was proudly sported on these new designs? The Luminor! A case our readers and Panerists alike will already be familiar with. The Luminor had (and still has) a timeless, sleek and clean design attributed to modern influence.

This modern Luminor case has a few minor changes to it including a switch from its original cushion shape to a middle case with squared lines. It’s bezel is simpler and the typical “Reg.tm” engraving on the lever bridge has been removed. The bridge also has a newer squared look to it and the watches dimensions are 44mm compared to how it was originally at 47mm.