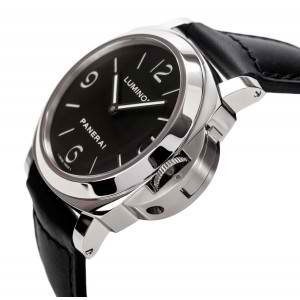 Officine Panerai got a big break in the year 1956. It was during that year that they managed to file the patent for a device known as a “crown protection bridge”, the very invention that would end up being the most distinguishing aspect of every Luminor model the company would come to produce over the next few decades, all the way up until now.

For Panerists, when the name “Luminor” is mentioned it conjures up the thought of a watch that has been reliable since its creation, one that is highly resistant to many conditions and is also extremely valuable for those who would want to take it underwater with them.

This model specifically (Officine Panerai’s Luminor Base) is a highly unique and original take on the classic Luminor. What seperates this model from its numerous Luminor descendants? To start it’s got a large, minimalist dial that (as mentioned above) is exceptionally reliable and easy to read under any sort of lighting. This makes it absolutely ideal for divers and other individuals who are seeking out some sort of timepiece to take with them into the darkest depths of Mother Nature’s watery ways.

This design (being a Luminor) also has the water-tight (and trademarked) lever crown protection device which protects the winding crown at all times from intrusive moisture and other such threats. Meanwhile, the movement of the watch has been developed by Panerai in total accordance with traditional Swiss watchmaking standards of the highest order.

Now for some basics. The watch tells time in both hours and minutes and has a case diameter of 44 mm. The case itself is also made from only the highest grade of polished, stainless steel giving the case a sharp and classy appearance. Interestingly each case is molded from a single block of said steel, and is only considered properly finished after 60 complex stages of work, starting with the initial stamping process.

The crystal of this piece is anti-reflective (allowing for perfect clarity at all times) and is made of sapphire gleaned from corundum, the second hardest material in the world… Only diamond is sturdier. This sapphire has no impurities, is totally transparent and is virtually un-damageable. The back casing is also made from sapphire on this model.

From Panerai itself, the mechanical movement of this piece is “an OP X, with a 56-hour power reserve, 17 jewels, Glucydur® monometallic balance, 21,600 alternations/hour, Incabloc® anti-shock device, Côtes de Genève decoration on the bridges and blued steel screws.”

Like all other Panerais, this model ships with a customized leather strap with a huge steel buckle on it. But why just stop there? One of the ultimate joys of wearing a Panerai is its ability to have its watch strap swapped out in a mere matter of minutes. Be sure and check out our vast selection of handmade leather watch straps for ALL Panerai models in our store tab.