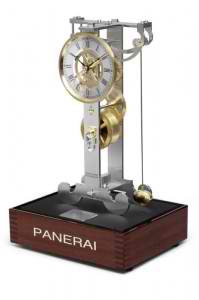 Officine Panerai has always been a quality manufacturer of timepieces. But up until now, they’ve all been restricted to wear on your wrist.

Inspired by Galileo Galilei, the Italian physicist, mathematician, engineer, astronomer, and philosopher who helped revolutionize the scientific revolution in more ways than you can count, Panerai has released a fascinating product as a tribute to the “measurer of time”.

The Panerai Pendulum Clock has been released in incredibly low numbers (there are only 50 available to the public) in order to honor Galileo’s undeniable efforts to help bring humanity into its modern era. The Pendulum Clock is a “faithful reproduction” of Galileo’s original invention that he constructed to demonstrate the law of isochronism. Basically Galileo used this invention to demonstrate that the oscillation period of any particular pendulum is nearly constant, regardless of the angle of its swing.

At the time (in the 17th century, mind you) this was a completely revolutionary concept. Clocks of the era were typically susceptible to errors that would cause them to wind up being off by up to minutes a day. This may not seem like much, but it really is. How many times in your life has ten minutes made or broken a deadline? Galileo’s invention allowed him to show his fellow man how a clock could be manufactured to cut down on these errors whereas a clock would only end up a few seconds off at its absolute worse. Not perfection, but it was a large step in the correct direction.

Galileo’s escape wheel was the first of its kind and is recognized as such. With exceptional historical relevance, technical wizardry and undeniable quality in common between both Galileo’s vision and Panerai’s track record it is only fitting that a modern meter of timekeeping would provide its loyal fan base with a testament like this.

Officine Panerai’s reproduction is replicated from an original drawing of Galileo’s, the only remaining bit of evidence of the original pendulum in existence.

The height of the clock is 35.6 cm, the width 18.5 cm and the depth of it is 11.1 cm. According to all evidence, this is the exact dimension of Galileo’s original model. The clock’s frame is made up of two plates, but instead of being made of iron (like in Galileo’s original) these reproduction’s plates are made out of nickel-palladium. The upper crosspiece of the clock carries the escapement and suspension for the pendulum and the lower one connects the lower frame plates which rest on four scrolled feet.

The spring barrel of this clock contains a 4.10 meter long spring which keeps the clock powered for a remarkable 8 days and it is easily wound with its included key.

We usually review watches here at Daluca, but this is such a neat release from Officine Panerai that we had to spotlight it. This is the kind of timepiece that reflects on all aspects of greatness that ride with watch collecting; it encapsulates historic brilliance, quality craftsmanship and elegant design.