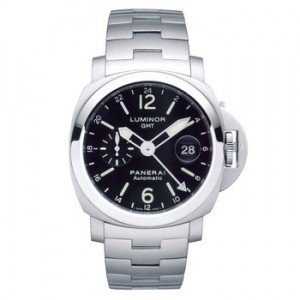 This Luminor GMT – 44mm is established by a number of unique factors. This design actually has a second time zone to it, which makes it unique, but it also combines the usual date, impermeable and polished case.

This Luminor GMT’s case is of an updated version of one of the long respected and honored models that Officine Panerai originally created for Naval commandos during the onset of the second World War. During this time there was no such thing as a quality underwater watch, and Officine Panerai set out to create one. The Florentine manufacturer we all love succeeded with flying colors in their quest to do so, creating the famed Radiomir in the process. Years later they would elaborate on this original model and give rise to their other design, the Luminor. The Luminor has long been cherished as a cornerstone of the Panerai Empire and is absolutely unmistakable with its large size and defining aesthetic qualities.

The winding crown on this model is made waterproof not through the usage of screws, but through the bridge-like mechanism that has a hinged portion in its center. This mechanism was patented by Panerai nearly 50 years ago and its presence on this watch makes it immediately recognizable at even first glance.

The dial on this watch comes in its traditional black color and upon itself bears two huge Arabic numerals and also the 24 hour linear markings which come as indicated by the very thin central hand that makes a total rotation around the face in not 12 hours, but a total 24. As it is with every other Panerai model this one is made for night visibility and its unparalleled luminosity guarantees that the numbers, indicators and the especially wide and partially skeletonized hands will all be easily visible in even the murkiest depths. The anti-reflective crystal that covers the watch’s face even contains a magnifying glass making the entire watch and all of its parts easier to read.

The GMT function on Officine Panerai’s Luminor allows its wearer to read two times simultaneously; both your local time and that of anywhere else in the world. This secondary time is displayed on the dial with an entirely separate hand from the local one.

The watch’s automatic movement is equipped with none other than the Panerai OP VIII caliber which is COSC certified. This certification makes this watch specifically unique and exclusive not only from a technical standpoint, but also from an aesthetically pleasing one. This movement’s design leaves the small seconds dial at 9 o’clock as to match the watch’s original design inspiration.

This design also ships with a metallic bracelet constructed of brushed-metal links that are extensively hand polished.
Do you own this watch? Considering buying one? Let us know your thoughts in the comment section below, and be sure to take a look at our shop at Daluca Straps.