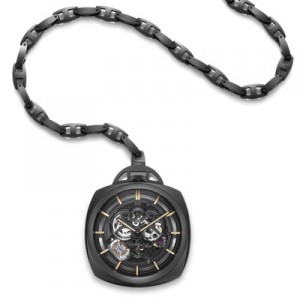 It’s Thursday here at DaLuca, and everywhere else for that matter. Which means that we only have another day to go until Friday! And also that, like every Tuesday and Thursday here on the blog, today we’re looking at a certain Panerai model in depth!

Earlier in the week we posted an article about a new kind of pocket watch that Officine Panerai had unleashed into the world, and if you haven’t had a chance to look at that thing up close go and do it now ( PAM00447 Review ).

Interestingly after I posted that review someone informed me that this wasn’t Officine Panerai’s first swing at the modern production of a pocket watch, and the individual with that information directed me to a 2013 model called the Pocket Watch Tourbillon GMT Ceramica.

This shouldn’t come as a surprise to anyone that Panerai is producing these throwback designs. If there’s one thing Panerai is huge on it’s legacy, with every watch that they release showing signs and influence from those watches that have come before it. Pocket watches had long been a staple of Panerai’s market before they fell out of fashion, and in the window of the Orologeria Panerai there hung an inscription reading “Pocket watches by the main Swiss makers” for many many years.

Panerai itself describes this model as “exclusive, and combining the technical content of contemporary haute horlogerie with echoes of the history of the Florentine brand”. I couldn’t have said it any better myself, so I won’t even try to. Instead, let’s get into tech specs.

This watch consists of a Radiomir case at 59mm in diameter and is made from zirconium oxide ceramic. The movement is the P.2005/S and has the tourbillon regulator which has been enhanced to allow the sophisticated skeletal structure to be properly seen through. As you can tell by the picture posted, the body of this thing is transparent and you can see much of the movement’s actions through the front dial of the watch.

That P.2005/S movement has a power reserve of six days and has one neat quirk going for it. This sophisticated piece of miniature machinery (which has been entirely developed by the Officine Panerai of Neuchatel) has its tourbillon cage rotate twice per minute on an axis perpendicular to that of the balance in order to compensate for potential running errors that would be contributed to pesky ol’ gravity.

The watch also has a small ecru disc that reflects the rotation of the tourbillon by making (you guessed it) two rotations per minute within the small seconds dial placed at 9 o’clock on the dial.

The watch ships with a chain also made of black ceramic and its individual links are inspired by that of a nautical chain and linked together by universal joints allowing it to be both flexible and tough. As with other Panerai’s it is also good for use underwater.

Have any other neat Panerai’s you want us to review here on the DaLuca blog? Drop us a line and let us know which are your favorites that we haven’t touched on yet. The weekend is almost here, friends, and what do you know? It’s already October. Time flies.

Be sure to visit our shop for all of your Panerai accessory needs! The holidays will be here soon and don’t be caught in the cold when looking for that perfect leather watch strap for the watch fanatic in your life!