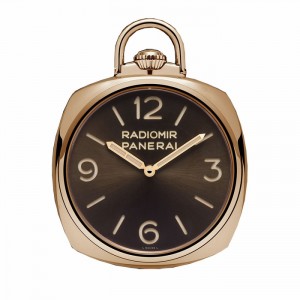 As they have for the past 20+ decades Officine Panerai has continued to shower us loyal fans with all sorts of new toys on a constant and regular basis. Today we examine a model just recently released in only 50 pieces to the drooling masses earlier this very year (2014).

Panerai is a champion of the wristbound timepiece BUT have you ever seen an official Panerai pocketwatch? Now you have, and not only that, but it’s made of gold. This old school bad boy is known as the Pocket Watch 3 Days Oro Rosso.

Pocket watches have always been a token of recognized class and are one of the manliest accessories a guy can carry around in his pocket. Up until WWI, when wristwatches struck it big worldwide, pocket watches had been THE most acclaimed and elegant pieces of personal time keeping equipment. After the wristwatch had come and conquered as the timekeeping king, pocket watches fell by the wayside as a sort of eccentric novelty, with only connoisseurs and collectors continuing to purchase them.

As time has gone on this has only proven more and more true and most kids these days probably wouldn’t know what a pocket watch was even if you dropped one in front of them. Luckily for us timekeeping buffs, however, Panerai has gone out of their way to rekindle and reimagine a timepiece that was very important at a very important time.

The Panerai pocket watch has the perfect cushioned shaped of the ever popular Radiomir, whose original prototypes date back to around 1936. Available in red gold, the polished case 50 mm in diameter has a beautiful, single gold bow surrounding the ever present winding crown at the 12 o’clock, instead of the usual and classic wire strap attachments.

The dial of this particular watch is in the always classic Panerai style, with its huge baton hour markers and its numerals at the regular cardinal points. It also has an elegant brown sun-brushed finish which endows the red gold model in particular with a sophisticated appearance of much depth.

As is often the case with such a precious object of understated elegance, it’s on the back of the watch that hides the most fascinating surprise. The large round cover concealing the movement can easily be opened in order to admire the finish of the P.3001/10 calibre, completely developed and made in the Officine Panerai manufacture at Neuchâtel.

This is (in my humble opinion) one of the most beautiful and unique offerings Officine Panerai has given to us in some time, and possibly even a decade. I can’t imagine how many are left out there of the original 50, but something tells me it’s not much.

Stay tuned to DaLuca for our continued reviews, quality handmade products and (for tomorrow) our continued look at the history of Florence, the home place of Panerai itself.