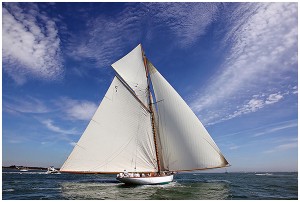 The 36th Regates Royales di Cannes ended on the 27th thus concluding the Panerai Classic Yachts Challenge 2014. “What’s that?” we’ve got an article on it linked right here, Panerai Transat Classique 2015. I suggest you read that through before continuing with today’s article.

This year’s event hosted 70 elegant yachts from 10 different nations, each competing for the ultimate prize. They had to battle through regattas at Antibes, Naples, Imperia, Cannes, Argentario and Mahon in order to rack up a high enough score to be declared this year’s champ! Who was it that walked away with such prestigious awards this year?

The spoils went to none other than the vessel known as Mariquita for the Big Boats category, the Chinook for the Vintage category and the Namib for the Classic category. With each of their hard-won victories now in the record books these ships have earned their right to have their names forever added to the Panerai Classic Yachts Challenge Roll of Honour.

Big Boat Mariquita is a 31-meter gaff cutter that was built by Fife in 1911 in Scotland. Of the six International 19-meter class yachts built, it is the only one that is still afloat to this day. She has won a litany of illustrious other regattas hosted by Panerai, but this was the first year she was able to best so many other famous yachts. The ship is owned by four Brits who invested in training the ship’s insanely dedicated crew in the century old art of sailing such a ship.

Chinook, a gaff cutter, is this season’s vintage trophy-taker. This cutter is American and was launched in 1916. She is one of the NY40s commissioned in the decade from 1916 to 1926, one of a number of ships built specifically for a posse of New York Yacht Club members. Of these NY40s there are no more than four still afloat worldwide. It has been 8 years since a gaff-rigged yacht claimed the Vintage trophy for its own, making the victory even sweeter for Chinook’s british owner, Graham Walker, who has won the Vintage trophy three times with his previous yacht, the 1916 Bermudan cutter, Rowdy.

Our final champion, of the Classic category, went to the debuting Italian yacht Namib, which is owned by Pietro Bianchi, a man from Parma. This 12-metre, designed and built in 1966 by the legendary Sangermani yard of Liguria, covered 1,500 miles of sea to reach the various venues in the course of the season. Namib underwent restorations in 2012 and 2014 which contributed to this overall victory

Aside from the season trophies, Cannes also brought the presentation of the luxury Officine Panerai sports watches to the winners of the Big Boats, Vintage, Classic and Spirit of Tradition categories of the Régates Royales.