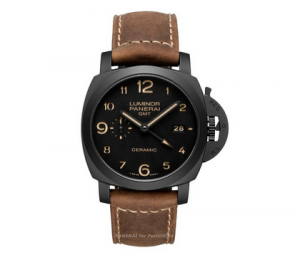 Like many of Officine Panerai’s watch designs, the Panerai Luminor 1950 3 Days GMT is based on a classic watch the company once provided for the Italian navy in the company’s infancy.

The 3 Days GMT is basically identical in its offerings to the 10 Day design also available from Panerai, except that it is far more affordable to the typical collector. Like its 10 day counterpart, the 3 day offers up a second time zone, power reserve display and a return-to-zero mechanism for its secondary hand.

Designed in Italy and made in Switzerland, this watch includes a satin case with polished bezel and a protective stirrup. The stirrup itself has a lever which is used to press the crown neatly into the case. This interpretation of the original Panerai Luminor is very loyal to its original incarnation which was originally released in 1950. The watch has since become iconic, and its history is deeply intertwined with thehistory of Panerai itself. This watch’s timeless design will undoubtedly still be as stylish in a decade as it is today, something many modern watch styles can hardly boast about.

With a sleek and unfettered appearance the watch’s dial is elegantly traced with stenciled numerals and indices that are powered by Panerai’s trademarked luminesce.

Although the watch is undeniably Panerai in both appearance and function, it possesses many details which separate it from any other Panerai watch. To start, the typically white lettering on the date disk is beige on this model. Also, the 3 day model doesn’t have the magnifying lenses above the date displays that some other Panerai watches have. With all of its various functions accounted for, the watchface still manages to avoid seeming cluttered. All of the hands are well placed and the hand for the second time zone can be hidden under the hand for the local time.

The trademark sandwich-style dial is simply elegant and has a layer of glowing Super-LumiNova beneath it which makes the dial glow remarkably bright and allows it to be visible and useful in even the darkest situations. This being said, the watch also has an impressive appearance of depth to it as a tribute to its naval predecessors. Another tribute to the watch’s ancestors comes in the stenciled font of its digits 6 and 9.

Overall, the Panerai Luminor 1950 3 Days GMT is a worthy addition to the Panerai family and any Panerist’s collection. The visual and stylistic tributes present on this watch to its navy heritage truly encompass all that Panerai has come to represent in the watch collecting community.