The 1950 3 Days Panerai Luminor, or more commonly known as the PAM 372 (PAM372) among the watch lovers’ community, was first seen at SIHH 2011. Since then, it has become one of Panerai's most popular models.

What's the reason? Perhaps because it incorporates so much of what people love. It offers a sleek military style and a classic case. It is necessary to understand the conditions under which this watch was created and its relevance to the past of Panerai before you actually buy this watch.

It wasn't long before the Fiddy began trading hands well over the listed retail price since only 1,950 watches were produced. Even now, it's exchanging hands for more than twice the list price more than a decade later.

Paneristis have been calling for a "base" Fiddy since the Fiddy came out in 2002. Base in Panerai refers to a watch with hour and minute hands and nothing else. Therefore, the watch should be a standard (not limited) manufacturing item so that everyone can have a chance to own one at a slightly lower price. Panerai listened and addressed the prayers of Paneristis with the PAM 372 in 2011, a design that was not a limited edition with two hands in 1950 fashion. 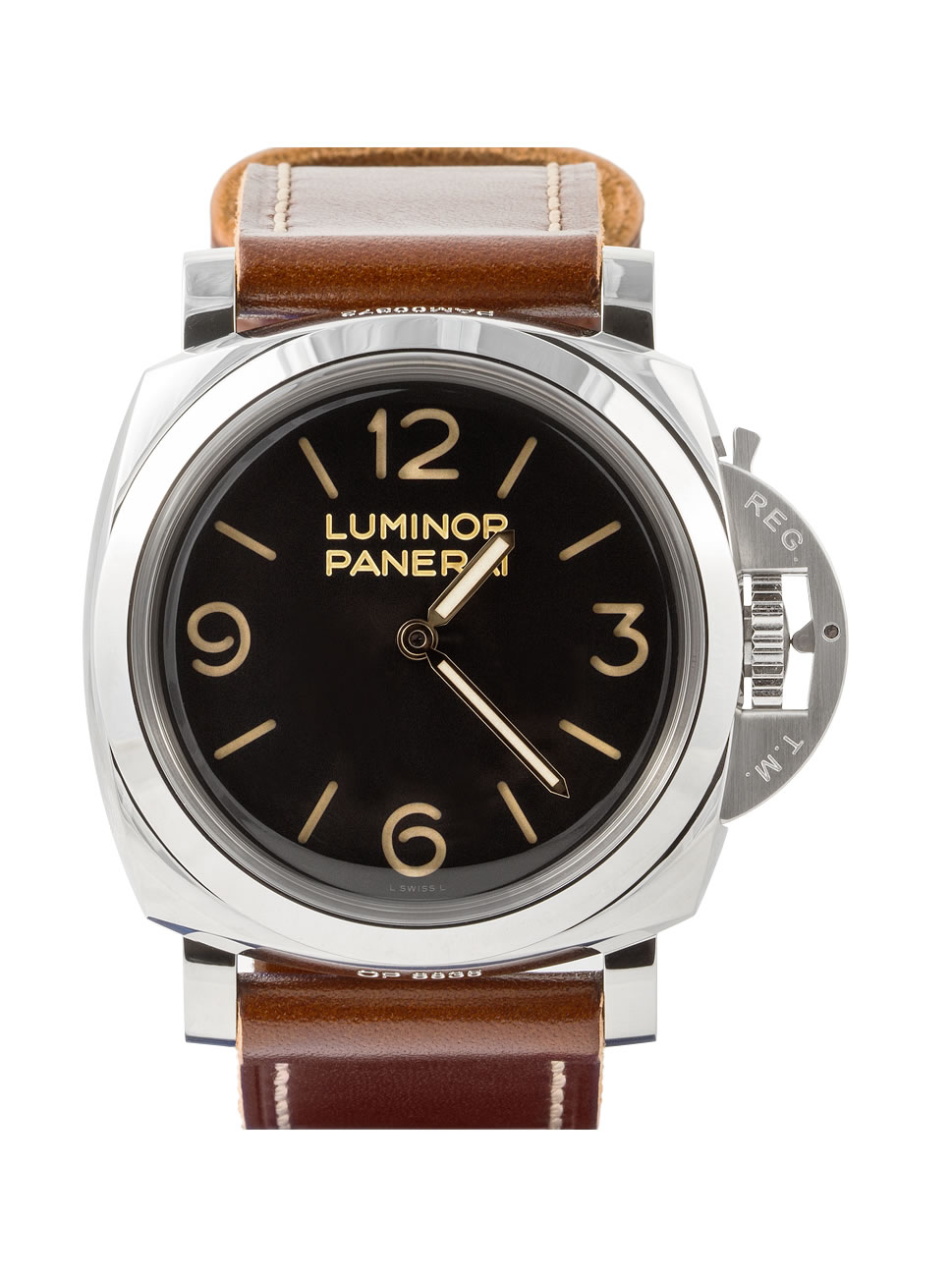 Like the Fiddy, the PAM 372 has a case of stainless steel in the 1950 model of 47 mm, but with subtle differences. Instead of being brushed, the case is completely polished stainless steel.

Nevertheless, the "device protecting the crown” brand maintains a brushed appearance. The case also has a very different shape. It is less chunky and has a more Radiomir-like cushion-shape appearance. It also has lugs that are slimmer.

Such small case improvements have had a profound effect on the feel and use of the PAM 372. Generally, it seems less cumbersome, and the audience thinks it fits better than the smaller 1950 Luminor watches, given its massive size.

It's heavier than the top and sits closer to the wrist and more snugly. People with shorter wrists love the new feel of PAM372.

The PAM 372 uses the in-house P.3000 movement, and when it comes to the size, this hand-winding caliber measures at a whopping 161⁄2 lines–about 37 mm. The watch has a sapphire case back showing the whole action.

Beating at 21,600 vph, the P.3000 uses two series-connected mainspring barrels to bring it a 72-hour or 3-day power reserve–hence the label. The PAM 372 moves very softly, as though the crown were bathed in rich butter itself. There is no cracking noise, only a mild resistance that builds up and builds up until the motion is absolutely wounded. However, it takes a lot of turns to generate enough power for three days before the watch is completely wounded. Winding is one of the joys of a manual movement, and it is always fun to wind the PAM 372.

Much of the allure of the PAM 372 rests in the gorgeous dial, which is highly similar to the Reference 6512 era. Like the classic 6512, it has a sandwich dial and a simple design with only the hour markers (12, 3, 6, and 9 in the trademark font of Panerai) and the words etched on it by "Luminor Panerai".

Instead, like the hour markers, the carved terms were lined with an "ecru" colored paint. The hour and minute hands were made of gold to suit it. The PAM 372 is easily appropriate for day and night occasions. 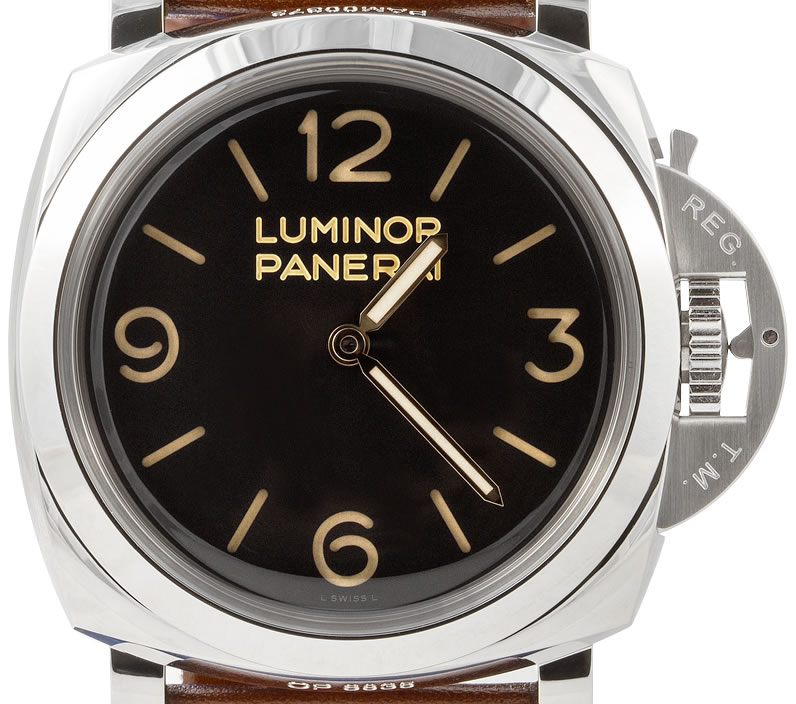 Panerai wanted to mount a large dome 3 mm thick Plexiglass crystal into the PAM 372. Between owners and fans, this was a point of contention. Detractors contend that stains are caused so quickly by a Plexiglass crystal and have no room on a luxury watch. So, they would choose the sapphire option. Plexiglass often brings weight to an already voluminous watch, making it tough to fit under cuffs. 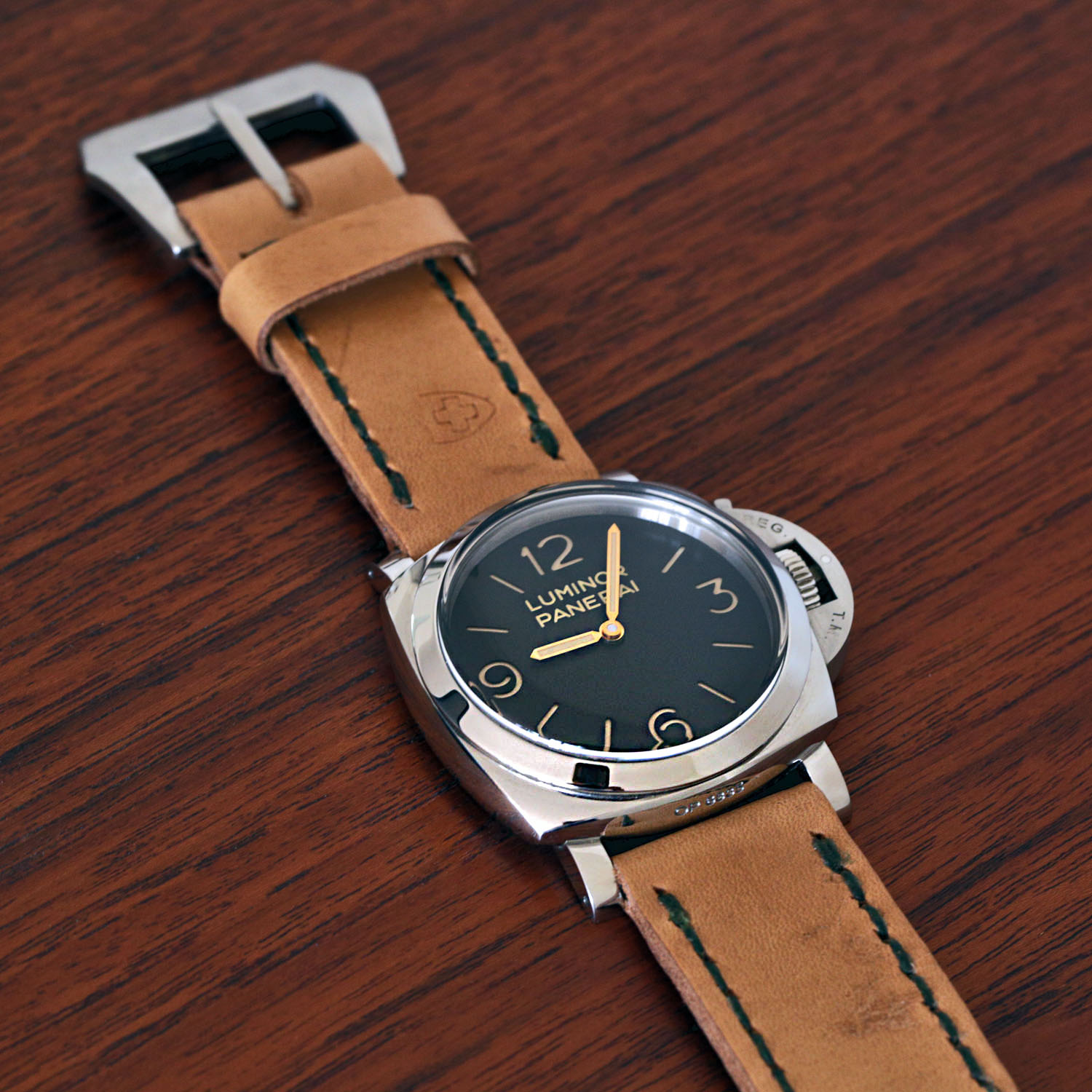 The PAM 372 comes with two straps, one in dark reddish-brown and the other in a honey-ish peanut hue, as well as a screwdriver, to swap the straps, like most Panerai watches. One of the pleasures of owning a Panerai is changing straps, and the PAM 372 looks good in just about any strap (keep in mind you will need 26mm wide watch straps for this watch).

So if you are looking for new straps for your Panerai, DaLuca Straps can offer a wide collection of leather watch straps, vintage Swiss Ammo Pouch straps, and handmade Lizard watch bands. Head over there now and choose the next perfect watch band for your Panerai watch.