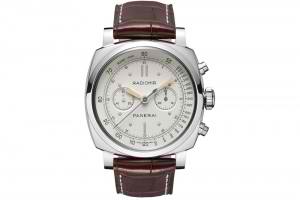 Interesting things are abuzz in the legendary world of Officine Panerai, with two large happenings occurring as I type this.

The first thing is probably the coolest and that’s why I’ll save the details on it for last, but first off news has come down the pipe regarding Panerai’s newest releases, and yes, they are chronographs. Alongside the other unique novelties that Panerai has been releasing this year, these chronographs are helping to expand an already wide array of chronographs already available from the company. One of these models in particular has a history dating back to 1943, when Officine Panerai presented the Italian Navy (check out my articles on their history if you haven’t already) with the brand’s very first chronograph, AKA the prototype that would eventually become the Mare Nostrum.

Since 1943 Panerai has released dozens of chronographs will all sorts of utilities and functions, far too many to even count. Originally these chronographs all were fitted with third-party movements (from such trusted brands as the Swiss manufacturer Minerva) but in 2005 Panerai began making their own movements. In-house calibres even began to be unveiled (in 2007) and since then Panerai has experimented with countless other experiments in producing all parts of their cherished watches.

Now on to the even cooler news. Harrods (the upmarket department store located in the UK) has just recently opened the doors on a temporary display that watch lovers and Panerists in particular will not want to miss under any circumstance.

Until September 24th the department store will be hosting a vintage Officine Panerai exhibit that will be open to the public for FREE. How neat is that? I know that I (the humble writer, perpetually trapped in California) will not be able to make the jump across the pond to investigate this exceptionally special and unique display, but someone in the UK should! And then let me know about it. I am curious just as much as I am sure that the rest of us watch aficionados are.

The watches will displayed in Harrods’ special “Fine Watch Room” (how cool is that that they even have that?) and each of them has been put up for display by a generous collector. The display will include 14 unique, vintage watches from Officine Panerai’s history and run the historical gamut of being made between the 1930’s and the 1990’s.

Just some of the rare models that are going to be on display will include the exceptionally scarce Radiomir California Dial 3646 from 1941, a 1955 Panerai Luminor with an Angelus movement and a 1956 Egiziano Grosso. If you’re anywhere in the area and have a love for Panerai, you MUST check this out.