Panerai, initially an underwater instruments and gauge manufacturing company, started manufacturing watches for the Italian Navy in 1938 and later began selling a limited number of watches to the public in 1993. The craze for Panerai and the trend for over-sized watches started when Sly Stallone flaunted his Panerai for watch collectors to gaze at in amazement.

In case you're wondering what a PAM is, it's a name followed by numbers to identify Panerai watch models. The functionality and design vary from model to model. Let us talk about the most basic Panerai out there, the Panerai PAM000.

Panerai PAM000, also known as the “Zero” or base logo, is the most basic Panerai watch. When we say basic, it means basic when compared to other PAMs, but it is still a much nicer watch than many other high-end watches out there.

This is the watch that you can wear anywhere, anytime as it illustrates how important the combination of style and simplicity is. Although it’s the plainest of the plain Panerai watches in many regards, it still holds a ton of hidden personality that a true watch collector will appreciate greatly.

When you look at a Panerai PAM000, the first thing you’re going to notice is the Panerai trademark half-crescent crown guard. The watch itself is encased in a 44mm stainless steel case which is far from being a small watch, yet it wears perfectly on your wrist, and the weight surprisingly doesn't feel to be a lot as it is perfectly distributed. The contrast of sharp edges and big, bold lines on the case adds to its beauty.

PAM000 has undoubtedly one of the plainest dials when we talk about high-end watches. The clean black sausage dial has the Officine Panerai OP logo and Luminor logo along with the hour indicators. Not a lot is going on when it comes to its hands as well. The Panerai PAM000 has only an hour and a minute’s hand.

The numbers and the hands of the watch glow green in the dark. The Super Luminova material that makes the hands and numbers glow needs to be directly exposed to the external light for it to glow throughout the night.

As much as the design seems to be pretty straight forward, it adds up to the simple and bold character of the watch. 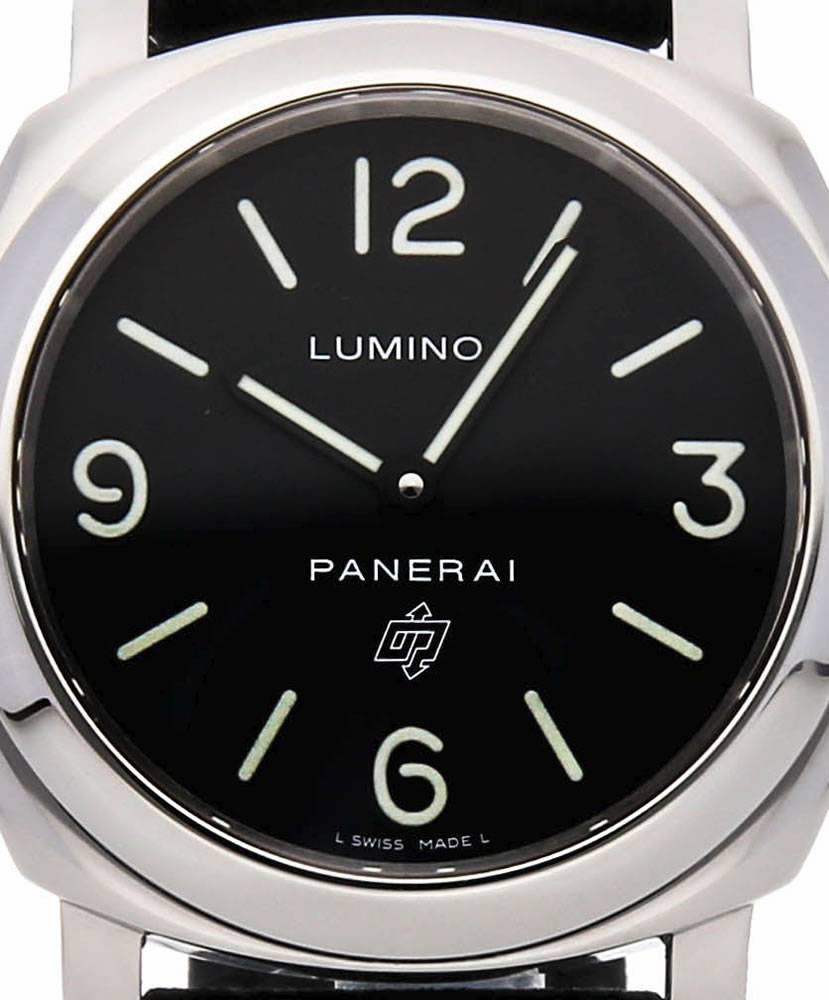 Panerai PAM000 doesn’t require batteries to operate, but you already knew that. The watch, for many years came with an ETA Unitas 6497 movement that was recently replaced by the in house P.6000 movement that is produced by Panerai with a 36 hr power reserve. All it requires to function is a little bit of your time and care because you'll have to wind it every few days, that'll further help to create a closer relationship with your watch.

The watch also gives you the freedom to rock the watch wherever, whenever and however you want. The Panerai PAM000 comes with the option for great personalization as you can easily change the straps at home and wear the watch with whatever you're wearing, from jeans to suits.

Everyone wants to own a Panerai. For those lucky people who already own one, DaLuca Straps offers an amazing online store to buy the perfect watch straps for your Panerai.

Whether you want a vintage French ammo strap or a militaryleather strap, you will find a high-quality companion for your Panerai. From factory-made to hand-made robust and long-lasting watch straps, DaLuca Straps has everything you need to make your Panerai watch look amazing!