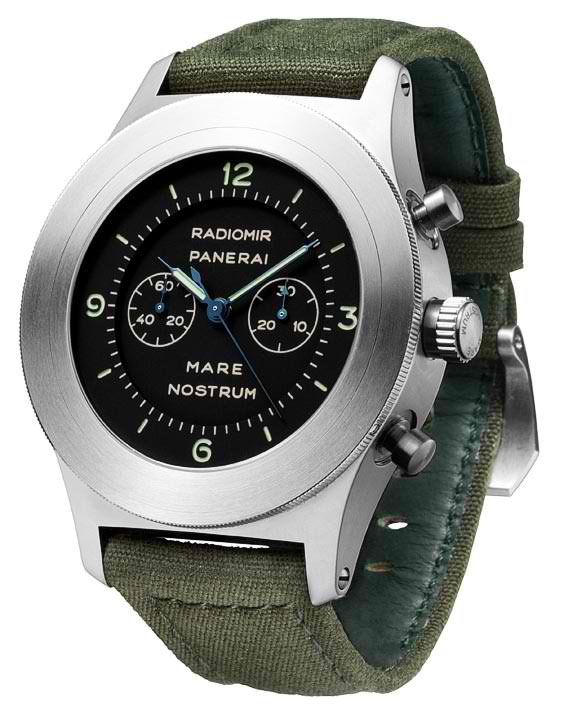 This gem of a Panerai is one of the rarest Panerai watches around. If you look very hard you can see its aura, which is due to the mystery behind this superb beast of a watch. We are lucky enough to have a re-issue that really stays faithful to the original model, all the way down to the production processes, case, measurements, dial, etc. This watch really results in such a wonderful model for very few of us to enjoy that has a 52mm case and some gorgeous blue dial hands.

The origins of this watch date back to 1943, when this watch was created to be given to the Italian Navy as a standard issue item. With only a few prototypes created, all production halted and the watch was left up until recently, where Panerai has re-issued it. There were paperwork with each prototype, but those were lost in the great flood of 1966 in Florence, Italy.

One of the few prototypes was recently discovered by Officine Panerai, and used in the production of the newly re-issued model. Only 99 are being produced, which add further fire to this rare and mysterious timepiece. Every detail was painstakingly reproduced in this model, so count yourself very lucky to see one, let alone own one.

The case has a large 52mm diameter, and is finished in a beautiful brushed look. The bezel is extremely round-like, but the case is not as round as the bezel suggests. The lugs have a very nice sturdy look and feel to them, which adds to the military durability of this timepiece. The back has a sapphire crystal glass, which is one of the few details untrue to its origins, but due to the upgraded features of the re-issue it was necessary.

The watch is guaranteed to be watertight up to 30 meters and was never meant to be a diver’s watch. It was supposed to be used on the ship, instead of below the water, plus chronographs back in that time were never totally waterproof.

The face of the watch is black with 2 levels. It is covered by a 1.6mm thick Sapphire Crystal glass and includes gorgeous blue luminescent hands. The movement is a hand wound and has 18,000 vibrations per hour, which is the same as the Angelus movement of the original prototypes. It is surrounded by an anti-shock device which helps to protect the movement and insides.

While Mare Nostrum is the name of the watch, its reference # is PAM 0300. The strap is a vintage-like green color that represents the origins perfectly. This watch is ultra rare, so you are lucky if get your hands on it.