Back in 2011, Panerai joined the Bronze market and they experimented with the alloy closely and launched a Bronze version or two a year. This year, Panerai is releasing a gigantic 47 mm Submersible diver. This may just be the most in-your-face bronze version yet. It's made of 161 grams of bronze, and on a bronze bezel you can find a sandblasted ceramic bezel patch. This watch is everything bronze.

Inspired by the exclusive 2017 PAM 907, the current Bronzo has a similar dark brown dial. The bezel uses a ceramic bezel insert for the series to suit the dial. This gives it a distinctive look that makes the style similar to that of other Submersible versions. 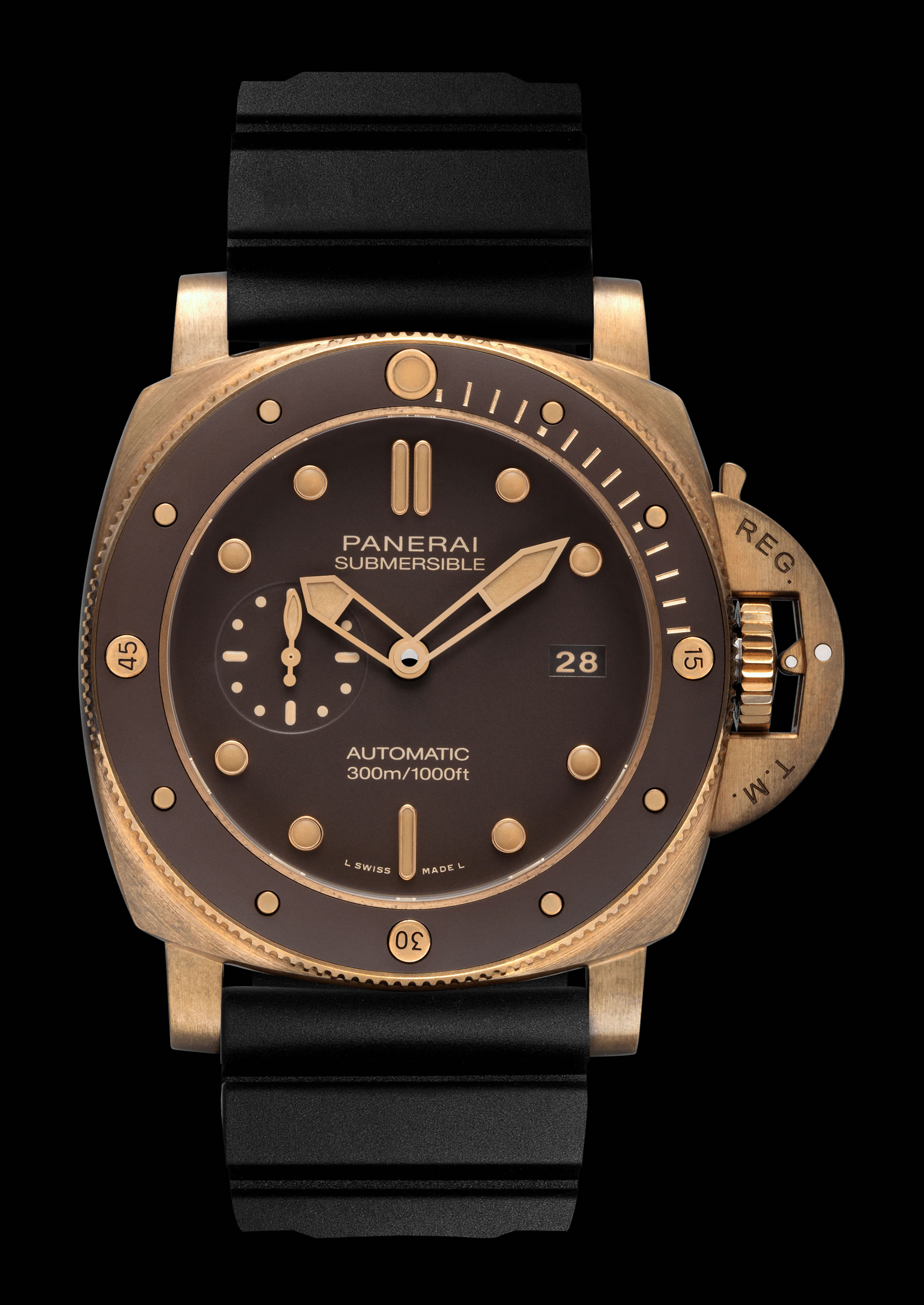 The Bronzo PAM 968’s case is the same as the first two versions. Since it has 6mm-high P.9010 acceleration inside, it is 47 mm wide and is slightly thinner than the first two models. Moreover, it's fitted with the Panerai trademark's compulsory crown-locking mechanism.

The case is made exclusively of CuSn8, or bronze phosphorus; a 92% copper alloy and 8% tin alloy. Unlike the aluminum-bronze alloys used by the Tudor Black Bay Bronze or Montblanc 1858 Monopusher Chronograph, the phosphorus-based bronze is deeply reddish when fresh and produces verdigris. Verdigris is the bright blue-green patina that forms from oxidization on the bottom. In brief, after a while, the case starts to look like a long-lost shipwreck treasure.

All the surfaces of the case have a linear brushed finish that accentuates the patina as the oxidization within the brushing grain continues to grow. 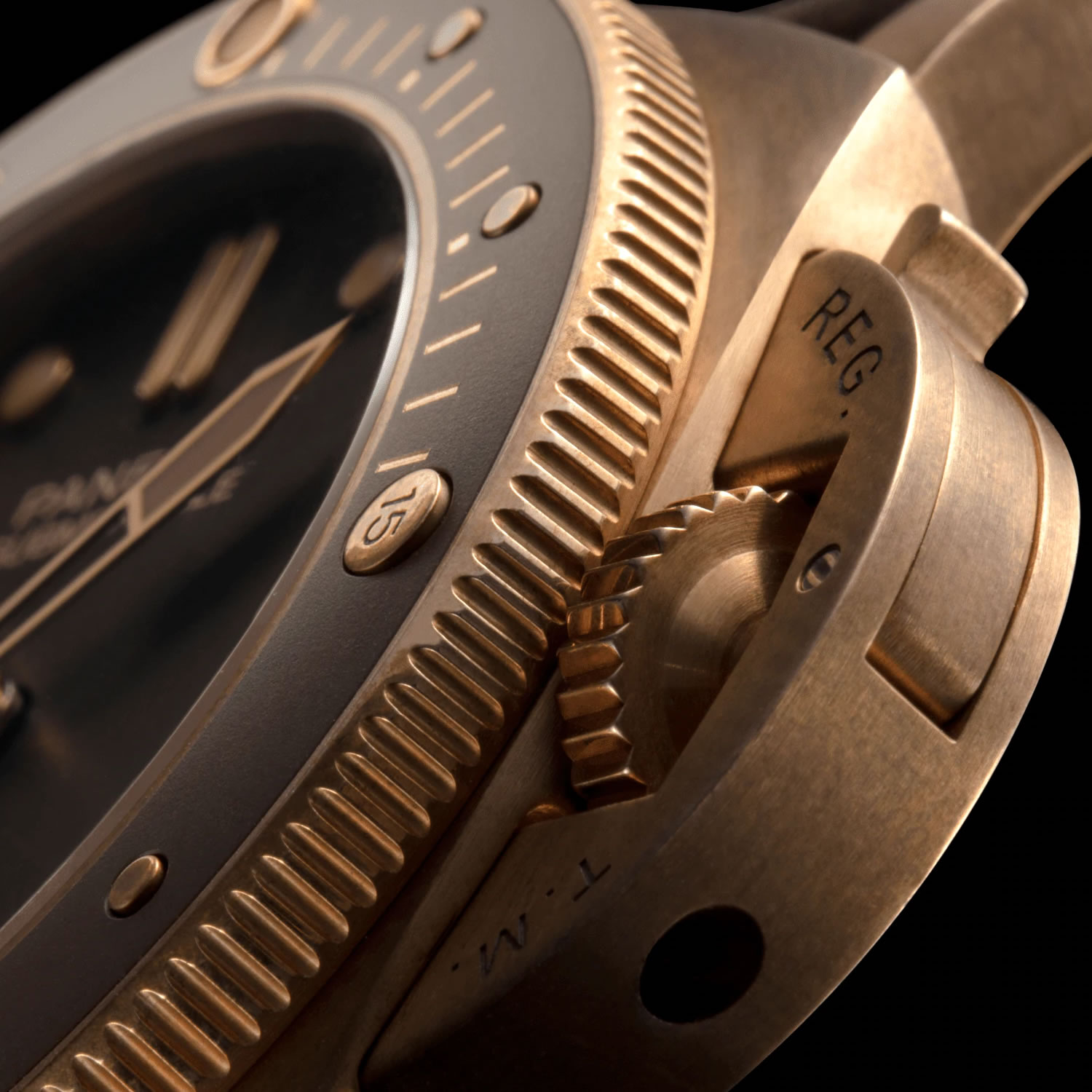 The dial is a sharply functional, flat, matt brown. However, the design is unchanged from the original Bronzo, with a combination of Submersible series’ line baton and dot markers.

However, the dial lettering has shifted, indicating the recent change in the Panerai collection's design. The Submersible is now on its own a separate unit, not part of the Luminor array anymore. Therefore, "Luminor" has been withdrawn and the depth score is on the dial at six o'clock to maintain the vertical balance.

Honey-colored Super-Luminova is a more significant departure from the earlier Bronzo models. The current Bronzo has a strong faux-ageing pattern on its luminous markings. The first two Bronzos had a white "lume" and the third version with a blue dial ivory lume. While it fits very well with the bronze case and brown button, it feels a bit influenced.

The standard hand of seconds that has come to signify the Italian label sits at nine o'clock, and the dial is a deep brown shade built to match the bronze shell. Beyond the metal, it is constructed to be water-resistant up to 300 meters and includes a dense application of the lume for visibility.

It also uses the P. 9010 caliber of Panerai with a 72-hour power reserve. Without the crown safety tool, it wouldn't be a true Submersible. So, the dial is also made from pure bronze. 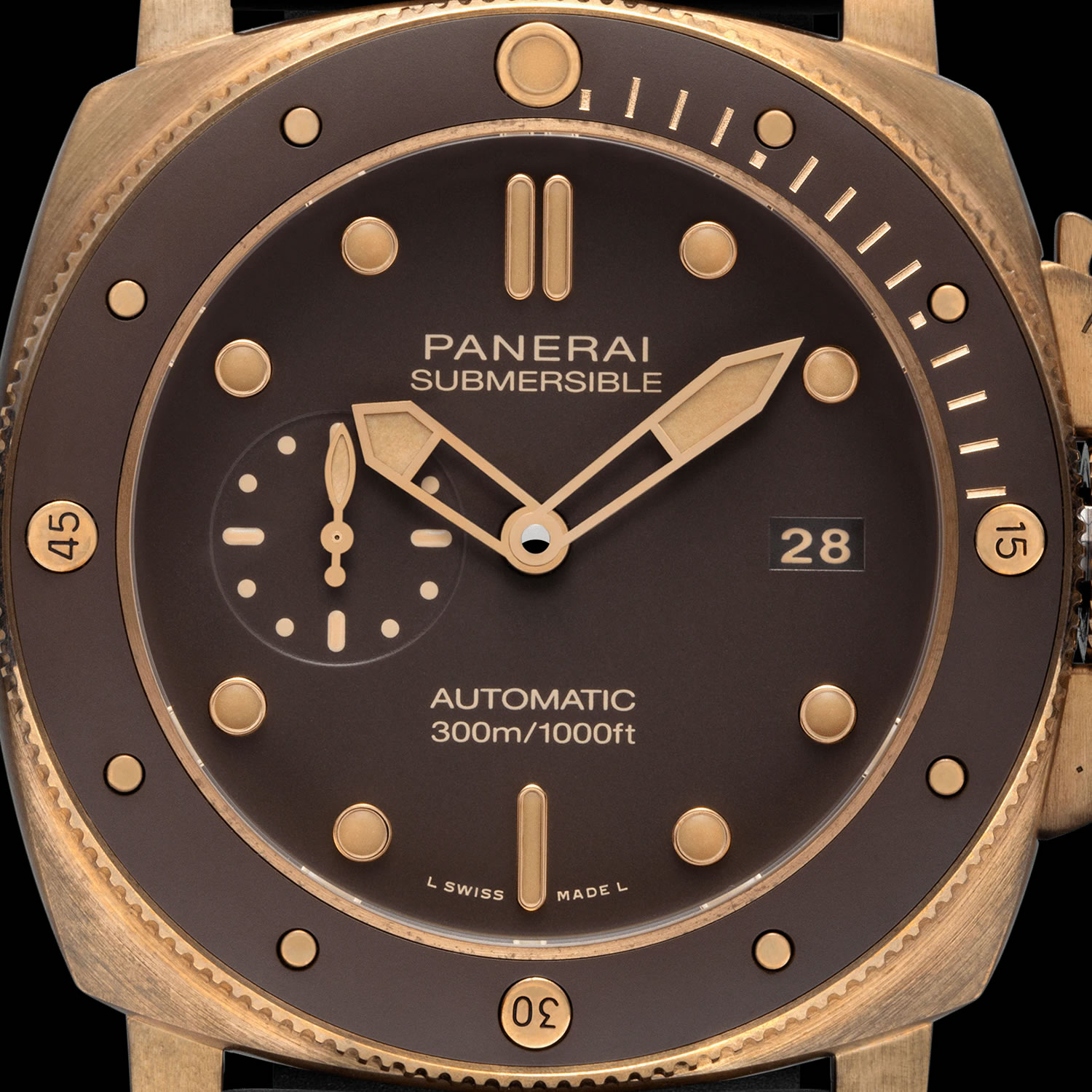 The P.9010 inner movement is noticeable through the back of the sapphire case back. It is a self-winding motion for a three-day power reserve with double barrels which has become the modern standard for all in-house calibers of Panerai.

The finishing of the movement is characteristic of Panerai, which means lots of straight grain and smooth and sharp mechanical lines. The light appears colored coming from the golden pieces and the blue lacquer filling of the engraved text.

There is no doubt that much has changed since Panerai launched the bronze series in 2011. At every level of the value continuum, bronze cases are now dime a dozen, from Tudor to Bell & Ross to IWC to Hublot to Ferdinand Berthoud and more. The overwhelming volume illustrates the diminishing popularity of the alloy.

However, Bronzo is still the best among the bronze series. The first Bronzo not only came before everyone else, but the alloy makes sense for the watch and the company. The contrast–the corrosion resistance of maritime bronze and the naval history of Panerai–allows for a real timepiece, unlike the other bronze watches that sometimes seem like a development conceit.

If you want to find the perfect watch strap for your Panerai Bronzo, head over to DaLuca Straps. From ammo pouch straps to shell cordovan military watch straps, DaLuca straps has got the best watch straps for Panerai watches.