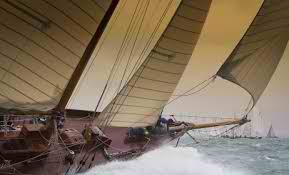 Those familiar with the history of iconic, watchmaking company Officine Panerai may not find surprise in the fact that for the past decade, Panerai has avidly fostered the resurgence of luxury yachting in the mediterranean. With a long history of creating specialized watches for the Royal Italian Navy, Panerai has embraced this nautical aspect of their history in the most modern sense. As a company so in touch with its own inherent class, elegance and quality, is it any question whether Panerai would transfer the immaculate standards of its watchmaking to its venture into the world of yachting? There is no doubt.

Since 2008 Panerai has hosted two of its very own regattas (one in 2008 and one in 2012) both under the banner of the Panerai Transat Classique. The races were each presented as mad dashes across across the Atlantic Ocean with teams of sailors relying on their own special combinations of strategy, experience and guttural fortitude to try and honorably best their seabound rivals. The team behind yachtStiren took the inaugural win in 2008 and in 2012 White Dolphin (1967) was victorious. For the Dolphin crew’s victory each member was especially awarded with a true treasure. The Panerai Luminor 1950 Rattrapante 8 days Titanio – 47mm, a watch emblazoned with the Transat Classique logo on its case-back was specifically produced by Panerai for the the winners of the nautical clash.

Both races were met with critical acclaim from the world’s seafaring community, with many seeing it as a flagship with intent to help preserve the history and enduring legacy of the golden age of yachting. Panerai itself stated that it plans to perpetuate the spirit of the sailor far into the future as they announced the return of the Transat Classique on the 7th of January, 2015.

Competitors are already gearing up for this next big run, with registration for crews and classic vessels already underway. This year’s incarnation of the race will up the challenge for its competitors in a number of ways. The course will begin on the Spanish isle of Lanzarote, and the competing teams will immediately be faced with a navigational dilemma in escaping the mazelike archipelago of Lanzarote’s fellow Canary Island neighbors. Once a team manages to do so successfully they’ll have to catch the tradewinds and head west, where they’ll eventually have to slug through the Lesser Antilles before arriving at their ultimate destination, glory and all awaiting them on the island of Martinique otherwise known as “the flower of the Caribbean”. Panerai has emphasized “solidarity and an esteem for opponents and environment alike” as two primary factors that will play a colossal role in who claims next year’s victory.

Yachting and boating fans alike will be able to follow the race with real time updates on various social media outlets and the Classique’s website (http://www.paneraitransatclassique.com/id-2015-edition.html) when January 7th comes. We here at DaLuca will continue to cover updates of the race as information becomes available. Until then we will continue to create new and elegant handmade vintage leather watch straps fit just for your Panerai!