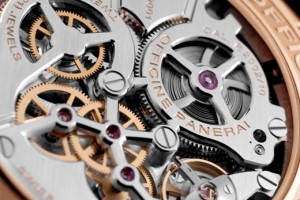 Here at the official DaLuca blog we review two Panerai watches every week on a regular schedule, but every once in a while we come across an offering of Officine Panerai’s that isn’t just another stylish and classy timepiece and we can’t help but share it with you.

This week in fact, we’re not just presenting you with ONE awesome Panerai product, but a whole family of them. We all know that Panerai has always been a supplier for the Italian Navy but you may or may not be aware that they also a supplier of quality, specialty instruments as well.

If you take a gander at Panerai’s official website you’ll actually notice that they offer (among their timepieces) a trio of these official Panerai measurement devices… And a wall clock, if you’re into that sort of thing. Posted all steely-like on the product page is a barometer, thermometer and hygrometer (it’s okay, I didn’t know what this either).

The barometer (world famous as the instrument designed by the Italian physicist Evangelista Torricelli in 1643) provides us humans with highly accurate details of atmospheric pressure. This extremely valuable information is used in both weather forecasts and other scientific readings. When using the barometer, high atmospheric pressure indicates good weather while low pressure warns that unfavorable weather is coming soon. The Panerai Barometer contains a metal box, called a “barometric capsule”, which is compressed to a certain degree by atmospheric pressure. This capsule will expand or contract as the pressure of the atmosphere fluctuates and its movements are transmitted to an indicator hand.

Meanwhile, the thermometer is an instrument for measuring temperature and is oen that most individuals are familiar with. This device was first used as an example to use the temperature parameters which were devised by Anders Celsius, the Swedish astronomer who in 1742 subdivided the scale of a mercury thermometer into one hundred parts from the freezing point of water to its boiling point. The Panerai thermometer functions by means of two metal strips with different coefficients of expansion bonded together. The bimetallic strip is designed as a spiral and a hand is fixed to one end of it, so that it rotates as the temperature changes.

The final device is one that has been around for more than two centuries. The hygrometer has always been used to measure the humidity in the air. For navigation purpose the device is used to assess the likelihood of rain and fog. Funny enough, the original hygrometers were actually employed in the 14th century to resolve disputes between buyers and sellers of wool, the weight of which, and thus the price, changes with varying humidity, increasing on damp days and becoming less on dry ones.