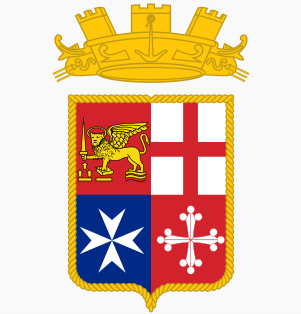 When we last left off in our other article, the Regia Marina (the original name of the Italian Navy) had just been deliberately gutted with a number of treaties signed after the conclusion of big ol’ WWII. The victorious Allies had basically stripped the Regia Marina of all of its power as an act of wartime compensation and as a result the Regia was left in various shambles.

Things were looking grim because they were. The Italians had to submit to the laws put in effect post-war and unfortunately were forced to deal with it for a few years afterwards.

Things did perk up, though… Once the political climate of the world shifted as it always does.

With Germany and Japan effectively neutered militaristically, the US was left alongside Russia as the two greatest powers in the post-war world and it wasn’t long before distrust and differences in political ideology began to birth tension between the two former allies. The Cold War was looming, and for the disengaged Italian Navy, this would prove to be a very fortunate development in history.

With a new-old nemesis on the world stage, Britain and the USA united behind an agreement that due to Italy’s prime location in the world that they would disbar the usage of Italian ships as their own. War reparations be damned, America and Britain knew how strategically valuable Italy’s location was in the world. Convinced that Italy could prove helpful if Russia decided to take militaristic action, the former Allies decided to allow Italy access back to its naval powers.

Many of Italy’s vessels had already been dismantled between 1948 and 1955, including the country’s prized flagship carrier “Aquila”. Russia, France and Greece refused to give up many of their plundered Italian vessels however and after these refusals and various vessel deconstructions, there were very few ships able to be recommissioned into the Italian Navy.

With the US and Britain in favor of recommisoning the Navy, other Western powers also began to take note of the significant positioning of the Italians in the Mediterranean. With Russia becoming an ever-more-menacing specter in world politics, all eyes turned to the Italian seas which was quickly becoming one of the main locations of direct conflict between Russia and its would be nemeses. This geographically prime location is what would come to help bring the Italians back to their naval prominence.

As soon as the Marshall Plan kicked into effect, Italy began negotiations with the USA to guarantee satisfactory protection against any potential Russian advances. The negotiations allowed the US to keep its military installations in the Italian Peninsula in exchange for relaxations on the post-war treaty restrictions.

On April 4th, 1949, Italy was invited to join NATO, and it did proudly. In order for the Navy to effectively contribute to the organization NATO effectively repealed all treaty restrictions on the nation, clearing way for it to rebuild its naval force, effective immediately.

NATO assigned the Marina Militare to patrol and defend the Adriatic Sea and the Strait of Otranto, as well as the naval routes through the Tyrrhenian Sea.

With much political and economic effort the Italians were able to rebuild their tattered Navy and also to bring it back to not only relevance, but also, esteem on the world stage. With the Western world’s blessings, Italy had been reborn upon the seas they had so long reigned over.