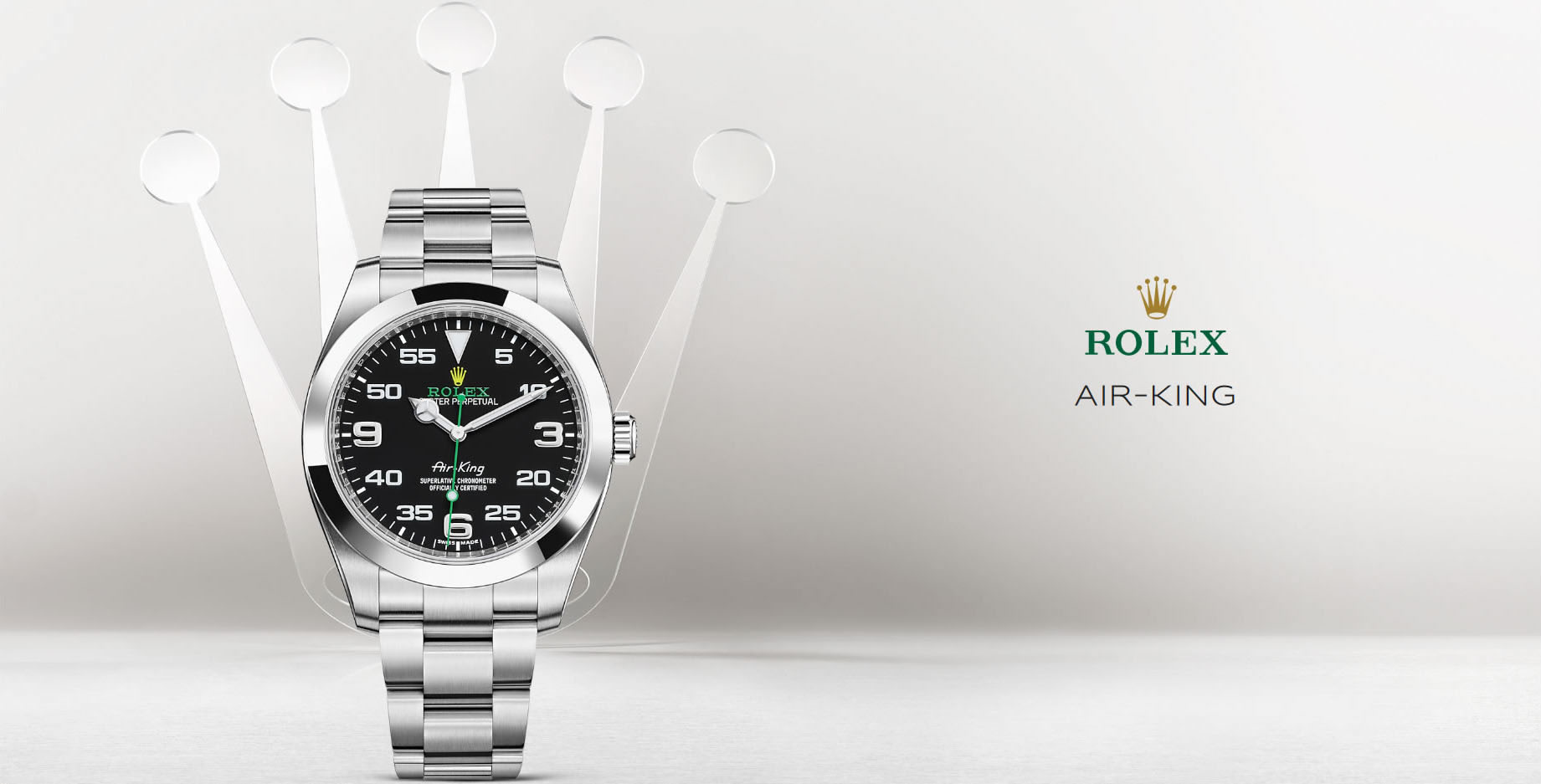 The Rolex Air-King is often forgotten among the Rolex collections, such as Submariner, etc. However, the Air-King is an absolutely stunning yet simplistic looking masterpiece for watch lovers. Let's take a deep dive into its history.

The Birth of a King

The Rolex Air-King was introduced in the year of 1945 and was produced during and after World War II. Initially, the watch was created for the British Royal Air Force and its pilots. The model received its title "King" due to its large-sized 34mm case.

In the beginning, the watch came with several siblings, such as Air-Lion, Air-Tiger, and Air-Giant. However, Air King dominated the industry, and other models were later discontinued.

The original and the first Air-King was released as Reference 4925. That item has now become super rare to find and is considered a masterpiece among the watch world. It shared a lot of similarities with the Rolex bubble backs at the time.

The first version of the watch came with a cream dial and even-numbered Arabic numerals. The model produced powerful successors, such as Reference 4499. The series offered manual-wind Hunter movements, similar to the Oyster collection by Rolex.

In 1953, Reference 6652 was introduced to the public. It featured a caliber 1030 ticking inside the case and became an iconic timepiece at the time.

The Beginning of an Era

Reference 5500 truly defined the series and set it on a path of success, fame, and love from the world of watch collectors. It featured a 34mm Oyster steel case, with the Oyster bracelet to match. It came with two fittings: caliber 1520 or 1530.

In 1958, Rolex introduced Air-King-Date as reference 5700. It was almost similar to its predecessors with one primary difference. The watch used caliber 1535 to add a date function.

The King Steps into The Modern Era

Every timepiece evolves with time. The Air-King entered the realm of the modern era in 1989 with Reference 14000. The revised design for the watch feature Arabic numerals at the 3-6-9 hours, with stick markers in between.

The hardware was also upgraded to caliber 3000 movements and a sapphire crystal instead of the traditional acrylic crystal. 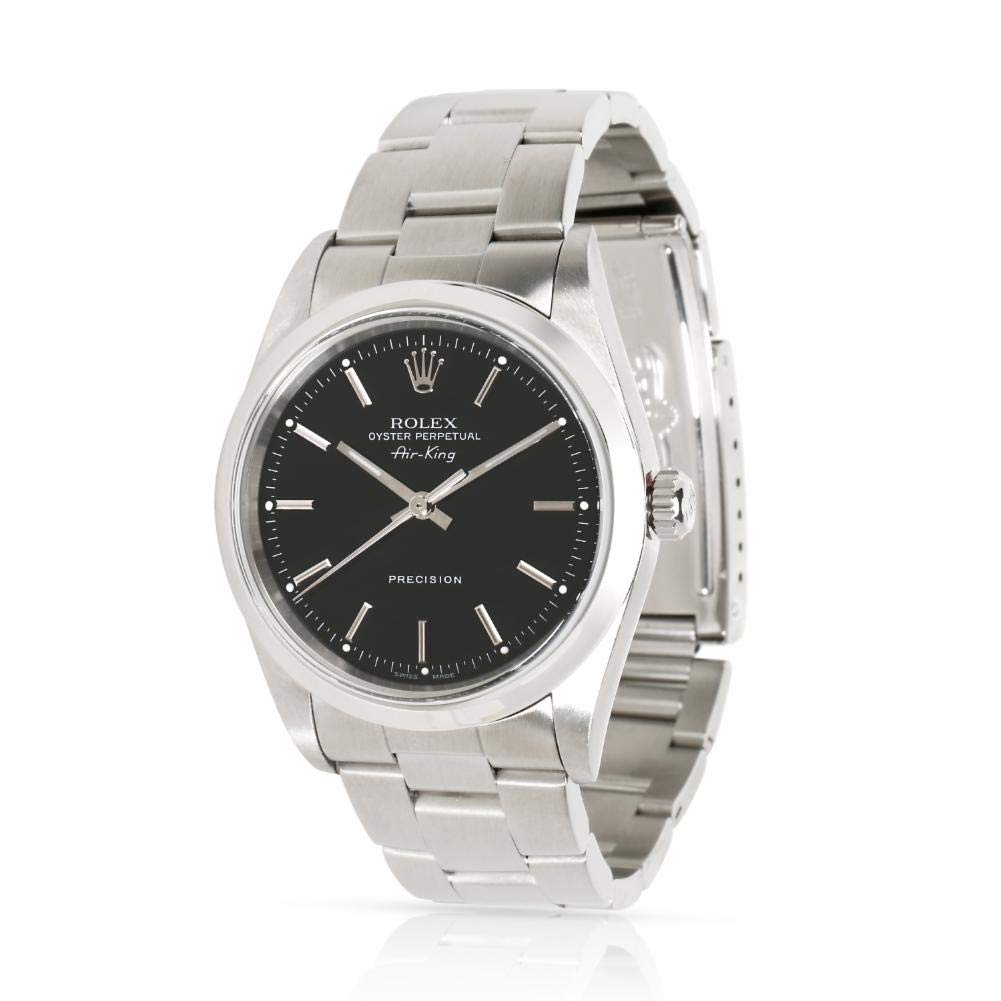 The next version, Reference 14010, offered a beautiful and awe-inspiring engine turned bezel for the consumers. It offered a break from the tradition smooth and flashy fluted bezels. The most fascinating detail about this bezel is that Rolex only used gold or gold-mixed material to create this gorgeous bezel. In the year 2000, the versions were upgraded, and the caliber 3130 movement was introduced for the Air-King.

Rolex introduced Reference 114200 in the year 2007. Rolex also introduced a sibling version Reference 114234 in the same year. The latter featured a white gold fluted bezel which stood out among the ordinary watches.

Rolex discontinued the Air-King in 2014. Instead of introducing a new version of Air King, the brand launched a new Oyster Perpetual. This decision left the audience, wondering if the king had been discontinued forever.

In 2016, the Rolex Air-King made a comeback with a new design: Reference 116900. The latest version offers a massive 40mm Oystersteel case along with with a powerful caliber 3131 movement and anti-magnetism features.

The Air-King may no longer be an "entry-level" Rolex, but it surely is a fun timepiece. Rolex has experimented with their lower-priced timepieces in the collection, and Air King does just that. It offers something unique rather than the traditional timepieces by Rolex.

Ryan Gosling and John McCain wore this watch to significant events and social gatherings. Here is a list of famous reference numbers for the Air-King:

The Rolex Air-King is a brilliant masterpiece from the vintage era. If you want to customize or enhance your Rolex Air King, you can choose a beautiful leather, shell cordovan, or vintage French ammo strap from DaLuca Straps and make your watch stand out.

The Rolex Air-King is a must-have as it offers the legendary accuracy, reliability, and prestige of Rolex. The current Air King is a modern reinterpretation of a once-famous classic Rolex Air King. It is a must-have for vintage watch enthusiasts, and it will definitely enhance your personality.