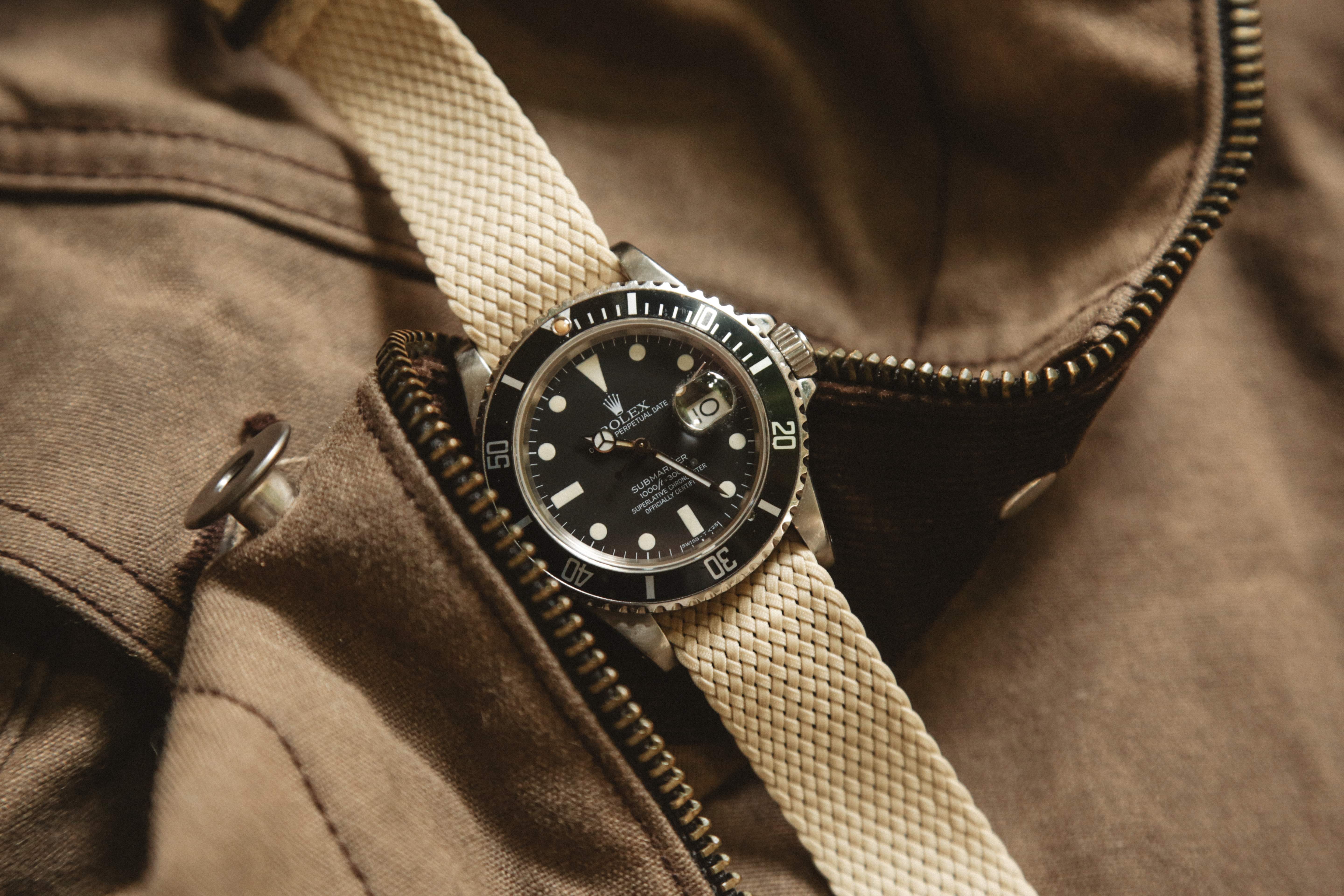 Owning and wearing any Rolex watch exudes class, excellence, and grace on the wearer’s end. Rolex Submariner is considered to be among the top diver’s watches in history.

Today, we will dive into the rich and exciting history of the diving legend. From inception to modern day models, we will cover everything in detail.

The long history and the initial model emerged in 1953. Rolex founder and president Hans Wilsdorf envisioned and created the first model of Rolex Submariner. His vision included two elemental components:

- Self-Winding Movement for The Wristwatch

Hans Wilsdorf was known to be a genius innovator and a caring boss who appreciated and valued his employees’ ideas. René-Paul Jeanneret was a member of his team. René-Paul Jeanneret also happened to be an experienced and seasoned diver. It was his idea to create a timepiece suitable for land and water alike.

At that time, many of the Rolex Models were already water resistant and elegant. However, the collection didn’t include a watch which was suitable for diving at great lengths without breaking down. The idea was to create a watch which would function perfectly underwater and would not be hindered by the fluctuation in pressure and temperature. 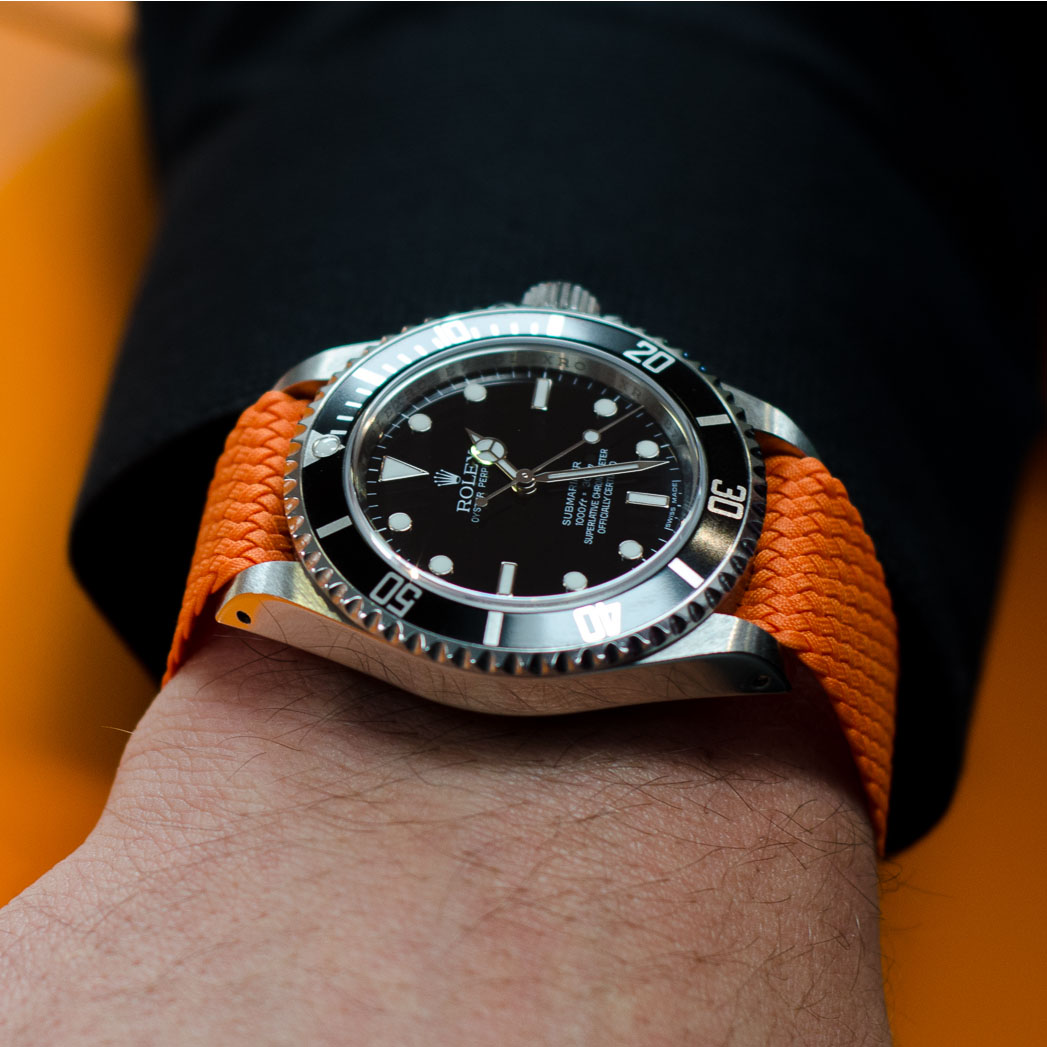 When the watch was released, Rolex decided to announce it to the world in a rather unique way. Instead of giving long talks about the watch, the founders decided to put the watch to test for everyone to see.

In 1953, Auguste Piccard was able to dive down to a depth of 3131,8 meters in his Bathyscaphe deep-diving submarine. Rolex Submariner was attached to the hull of the bathyscaphe. The Rolex logo and luminous dial were clearly visible to the audience.

Once the diver emerged back to the surface, the watch was still affixed to the vessel’s hull and to everyone’s astonishment, it was still working properly. The timepiece was not affected by the depth, dropping temperatures or water. The time was in sync.

Later on, in 1960, the watch was put to another test. This time, the vessel was the world famous Trieste which was descending for the 65th time into the depths. The divers intended to reach the Challenger Deep in the middle of the Mariana Trench. 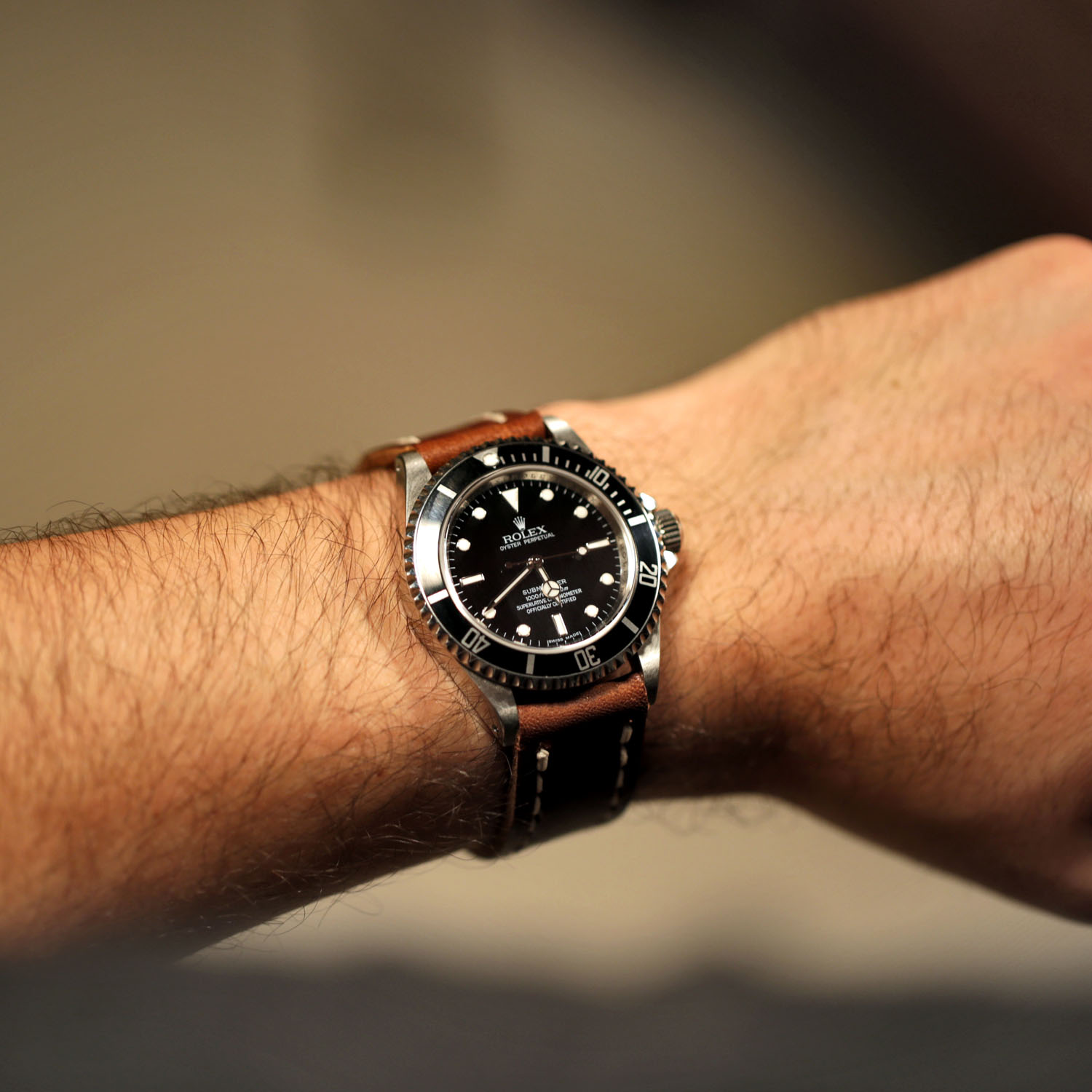 Outside the 2-meter-wide pressure sphere, Rolex Submariner was attached to the hull. The test was going to determine the prototype Oyster Case from Rolex.

The case was designed to withstand extreme temperatures and pressures up to 10,916-meter descent. At that depth, the pressure on the outside of the vessel was supposed to be 1,125 kg/cm.

When the vessel dived and emerged back to the surface, the Rolex prototype was still functioning properly. This proved their mettle in the industry, and Rolex Submariner quickly rose to fame.

The current models of the watch are compatible with a wide variety of watch straps. From vintage French ammo to military leather straps ; you can pair them with all the premium quality straps from DaLuca Straps.

The Evolution of Submariner

Rolex is one of the top watchmakers, and it releases new models every year. Submariner went through a rigorous phase of continual upgrading since 1953. If you want to take a look at its evolution, here is a simple table to help you out. 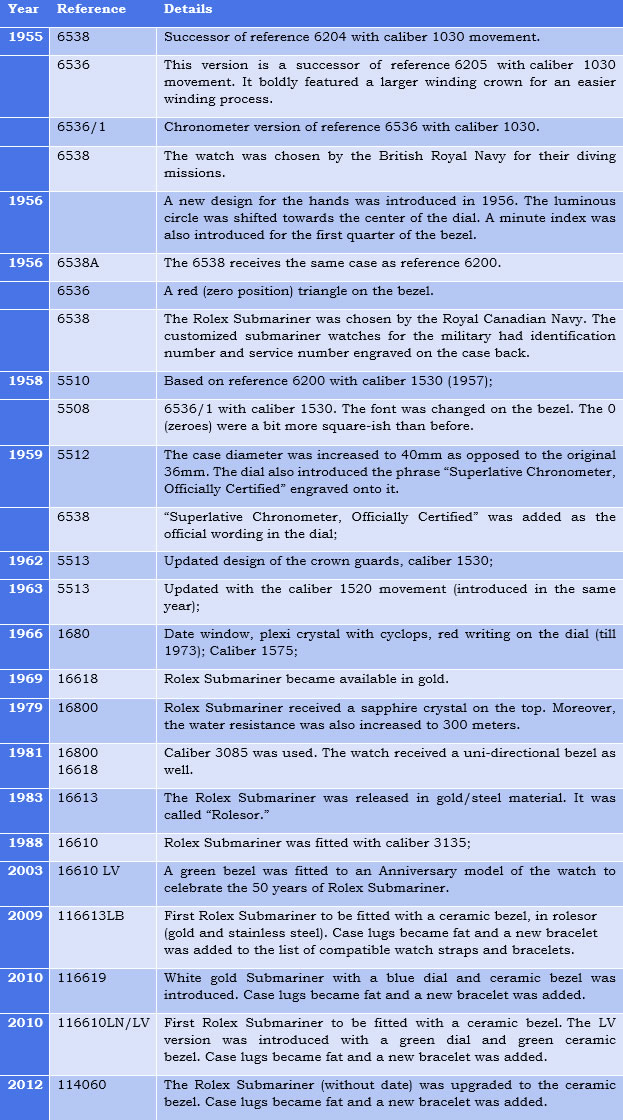 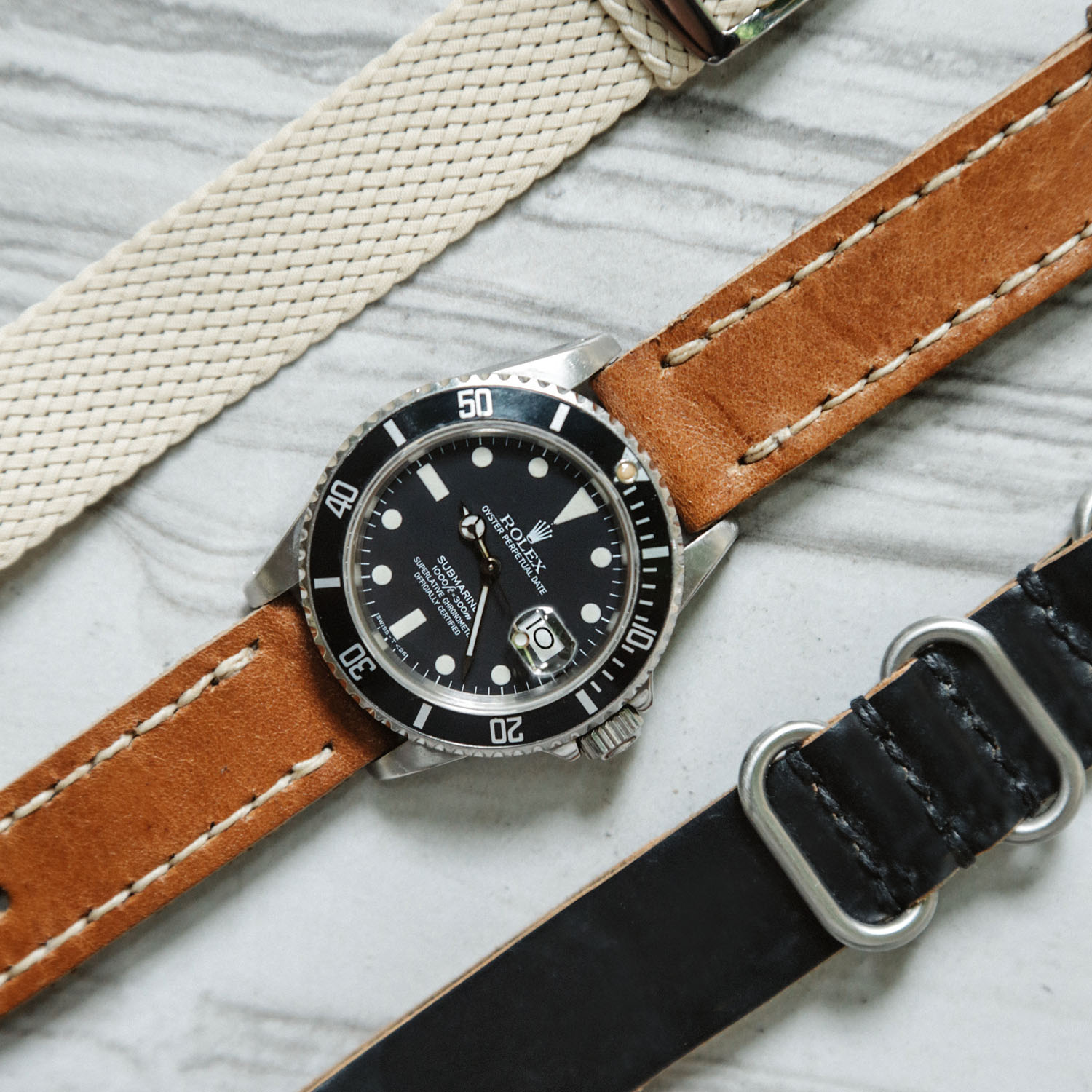 Rolex Submariner can add to your charm and overall personality. It can uplift the grace of your attire, and can easily tie your outfit together.

Rolex Submariner was originally introduced for the diver community, but today, the watch is celebrated as a classic icon in the chronograph world. DaLuca Straps is proud to present matching strap companions for your submariner.

You can pair up your Submariner with one of our leather watch straps or shell cordovan watch straps with ease. We offer nothing, but the best to our clients. Every watch strap is created from leather from the best leather tanneries of the world.

The choice is yours. You can also choose a custom watch trap to go along with your Submariner. Rolex offers the top chronographs in the industry, and we have just the right watch straps for your beloved watch.