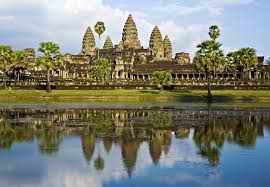 Whether you’re a weathered travelling champion who has long given up their reputation as just another “tourist” or a landlocked aspiring globe trekker hoping to one day hit the big and adventure from one side of the globe to the other… You know something truly exotic when you see it. Birds, plants and foods all can qualify as such, but this evening (or morning depending on where you call home) we’re taking a keen peek at some of the most exotic travel destinations to be found on our humble little mudball planet.

First stop on our global excursion? Cambodia. Angkor, Cambodia. Sounds like the temple in Indiana Jones, right? It may as well be. Angkor is the former foothold of the Khmer Empire (a once powerful Hindu-Buddhist empire which got wiped off the map sometime in the 15th century) and is home to a temple large enough to rival any other holy monument in sheer mass called Angkor Wat. It is in fact the largest temple on Earth and its name in translation means “Temple City”. The place is carved to the core with beautiful decorative architecture and makes it not only one of the largest temples, but also one of the most beautiful. Another interesting aspect of the city itself is that in 2007 a posse of researchers managed to determine that Angkor had been the largest pre-industrial city in the world supporting up to a million people with its advanced waterway systems.

Next up? A city whose name you’ve probably heard before and probably know very little about. Here’s just a quick little snippet of info about the Nepalese city known as Kathmandu. Kathmandu is Nepal’s capital and also is its largest urban conglomerate. The cafes of the city are must see and serve up everything from banana pancakes to lassis (a yogurt based drink). All parts of the city are filled with genuine 16th century temples that are (albeit not as large as Angkor Wat) are equally beautiful in their architecture and paint jobs. If you’re not so keen on temples there are other lovely sights to ogle with those eyeballs of yours, namely mountains. Kathmandu is surrounded by four famous mountains known as Shivapuri, Phulchoki, Nagarjun, and Chandragiri. The reason for all the mountains peering up above? Kathmandu is located in a huge, thousands of years old valley.

Neither of these ventures comes as cheap necessarily, but what in life worth doing really is? If you want to walk among two thousand year old structures like a king, you better dish out a tribute to all of those kings who have walked your path before you. By helping fund these tourist targets you are preserving not only the prosperity of the locals but also that cherished places like these will exist into our human history’s future.

If you’re finding interest in these little glimpses at exotic locales let us know! As it’s a passion we here at DaLuca would love to share with our loyal fan base on a more regular basis.