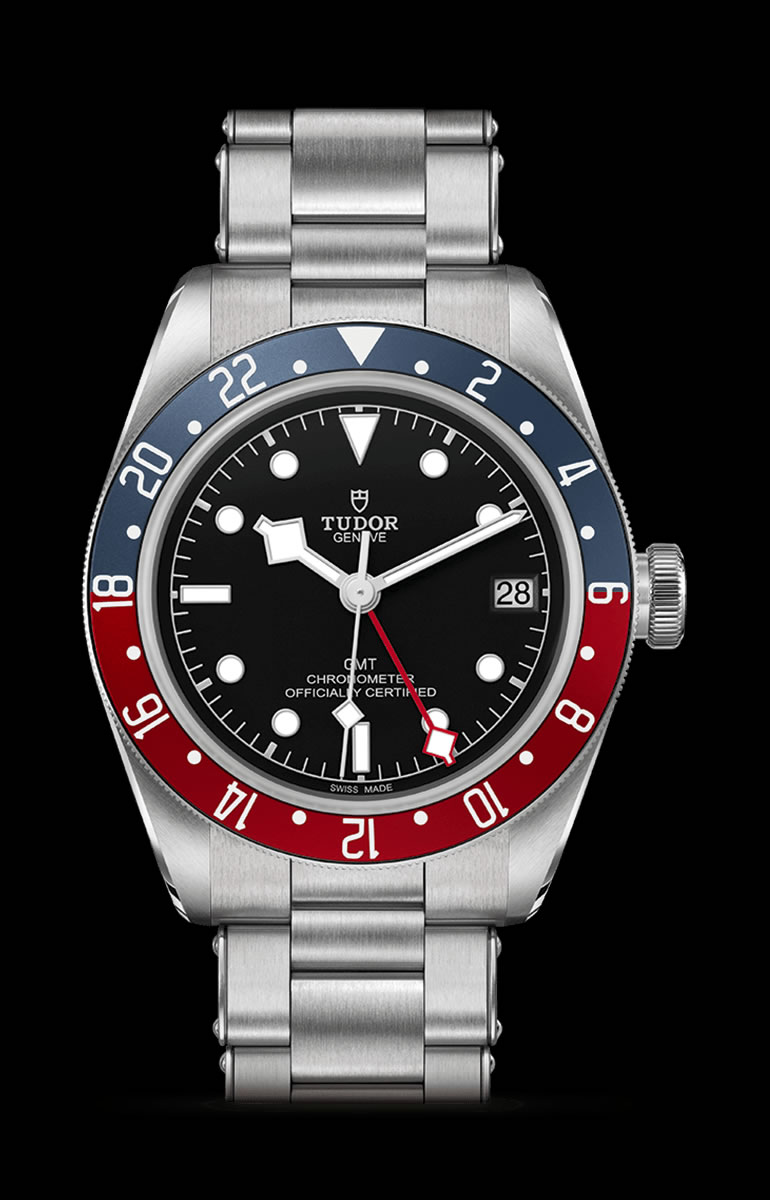 What Does the Watch Offer?

Prior to the release of Black Bay GMT Pepsi, Rolex, the sibling company of Tudor, announced a Pepsi-colored bezel for its new series. Tudor followed and announced the brand new Black Bay GMT with a Pepsi-colored bezel. If you want a history of the original inspiration for this watch, there is none. While it belongs to the GMT series, it is a unique addition to the series and takes very little from its predecessors.

The watch comes in a stainless steel case with a thickness of 15mm and a diameter of 41mm. This is why the watch feels a little heavy around the wrist, but sits comfortably due to its design. It is designed to be water-resistant up to 200 meters, which is not as amazing since the competitors offer a water resistance of up to 300 meters nowadays.

The Pepsi-colored bezel is made from aluminum, and the two colors indicate day/night time zones. This makes it easier for the wearers to keep track of time. The dial comes in a matte black color, and the snowflake (non-glittery) hands sit elegantly against the dial. Moreover, the contrast between the dial and the hands makes it easier for the divers to read the time even in the depths of the water.

A double domed sapphire crystal sits atop the dial. This crystal is not only polished for precision but is also scratch-resistant like the majority of the crystals nowadays. However, since the crystal is double-domed, it is expected to withstand more pressure than the competitors.

The watch is powered by the in-House MT5652 with the "True" GMT Function. This movement offers a power reserve of up to 70 hours and makes the entire watch twice as expensive as other models in the market. Moreover, since the movement is TRUE GMT, this means that you will be able to set time without having to lose minutes or seconds. While you adjust the hour marker, the seconds and minutes' hand will keep going.

The hour, minute, and second hands are coated with Super-LumiNova. This makes them pop up against the matte black dial and makes it easier to read time under the sun or in the darkness.

The watch comes with a powerful and durable Tapering Steel Bracelet. This is a patented style from Tudor and is considered to be quite powerful for its size.

Tudor has always followed in the footsteps of its sibling company, Rolex. However, this is the first time that Tudor has tried to set itself apart with a brand-new Black Bay GMT Pepsi watch. The only thing that Tudor took from Rolex was the color scheme, and the remaining aspects of this diving watch are quite unique.

If you currently own the Black Bay GMT Pepsi, congratulations. If you are looking for new watch straps for your watch, we recommend heading over to DaLuca Straps for some of the best straps in the market. You can easily find a modern leather military watch strap or a rare shell cordovan watch band that will pair perfectly with your Tudor. Everything at DaLuca Straps is created from the highest quality materials, so you know it will be durable.