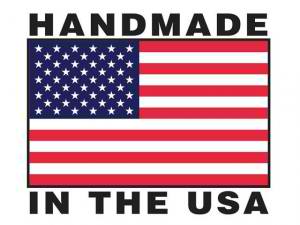 DaLuca has always been a company that has embraced and proudly expressed the fact that most all of its products are handmade in the USA. We hold this aspect of our production high esteem for a number of reasons, as do many of our customers.

The financial disaster of 2008 wracked the United States of America at its very core. Jobs were being lost, homes were being repossessed in alarming numbers and key financial institutions were collapsing at every turn.

In the seven years since this dim time in American history, the country has sought to reclaim its financial fortitude on each of its damaged fronts. Americans have quickly learned a key part to the recovery process, luckily, and have gone out of their way (and in some cases deeper into their pockets) to help out their communities, neighbors and country at large. These proud citizens buy American.

That little red, white and blue sticker on the boxes, cases and packages of some of your favorite products represents a lot more than just casual consumerist patriotism, here are some ways that buying American helps us all.

1. Safety for Workers and Consumers alike: In overseas factories there are oftentimes no safety guidelines in place when it comes to workers’ well being. Deaths and injuries can occur on the job with little consequence. Products made in these factories also can contain toxic paint or other dangerous defects that could be hazardous to you the consumer, and your family. By buying American you are supporting a web law that makes sure everyone (both worker and consumer) are protected by safety standards.

2. Help Expand the American Economy: This one is fairly simple. If jobs are sent overseas, that means less people here at home are working. Help your fellow American and promote the growth of our economy here at home. Not only will you be help create other jobs but you will also be promising that jobs already in existence won’t be shipped overseas.

3. Keep the Environment Clean: China (where the majority of the USA’s manufacturing has been exported to) is producing so much pollution from its factories that studies say that smog is drifting across the Pacific back to our west coast. Again, there is much looser regulations on environmental protection on foreign countries. Here in America, regulations keep it in check and don’t sacrifice environmental well being on the altar of industry.

4. Support Honest Wages and Battle Exploitation of Workers: Child workers and other worker exploitations are rampant overseas. By buying American you are supporting fair wages and also are preventing children from being exploited.

5. Promote US Independence: As long as our economy relies on foreign bodies to thrive America will never be truly independent. By reeling you purchases in and helping to support American business you are little by little helping America regain some of its long lost independence.

6. Advocate Product Quality: Product quality can also be less than stellar when produced overseas. Mass production doesn’t regularly worry itself with quality with quantity as its main mode of manufacturing. In America, quality is the name of the game and purchasing American you are making sure that anything you buy will be made with care and quality.

7. Make Way for the Future: If jobs continue to be lost to overseas factories our country could fall into some dark times. Our economy has slowly recovered since its collapse and by supporting your neighbors with your financial blessing you are promising the continued recovery of our nation’s financial sitting.