In 1860 Giovanni Panerai founded his shop in Florence which was later developed into the legendary brand we know today, Officine Panerai. In later years the Panerai frenzy would take over the world, but in 1938 the company was still designing the famous Radiomir model for divers in the Italian Navy. This timepiece was characterized by high water resistance and optimal legibility.

1993 was a key year for Panerai as they would introduce their new model, the Luminor, to the public. That year, the brand presented the Luminor for the first time and its variation Luminor Marina to the public which proved to be a lasting endeavour for the brand that has stayed strong to this day. Before then, Panerai watches were only available to military forces.

If you are looking to buy your first Panerai watch but not sure where to start among the diverse variety of Panerai watches, then go for PAM111 which is one of the most recommended models. Even though historic and vintage Panerai models such as the 6152/1, 5218/202A and Mare Nostrum are eye-catching, they are very hard to find and much more expensive, making this model a great entry model into the wonderful world of Panerai.

Luminor Marina PAM00111 is one of the PAM watches that has got historical roots, outstanding features, and unmistakable Panerai look with the device "protecting the crown." It’s relatively subtle and the 44mm, 316L stainless steel case is large but reasonable. Due to the movement's dimensions, the case is not overly thick at 14.48mm and sits well on the wrist. The large 44mm diameter keeps the watch stable and from wobbling side to side. The finish on a Panerai watches whether brushed or polished is second to none. 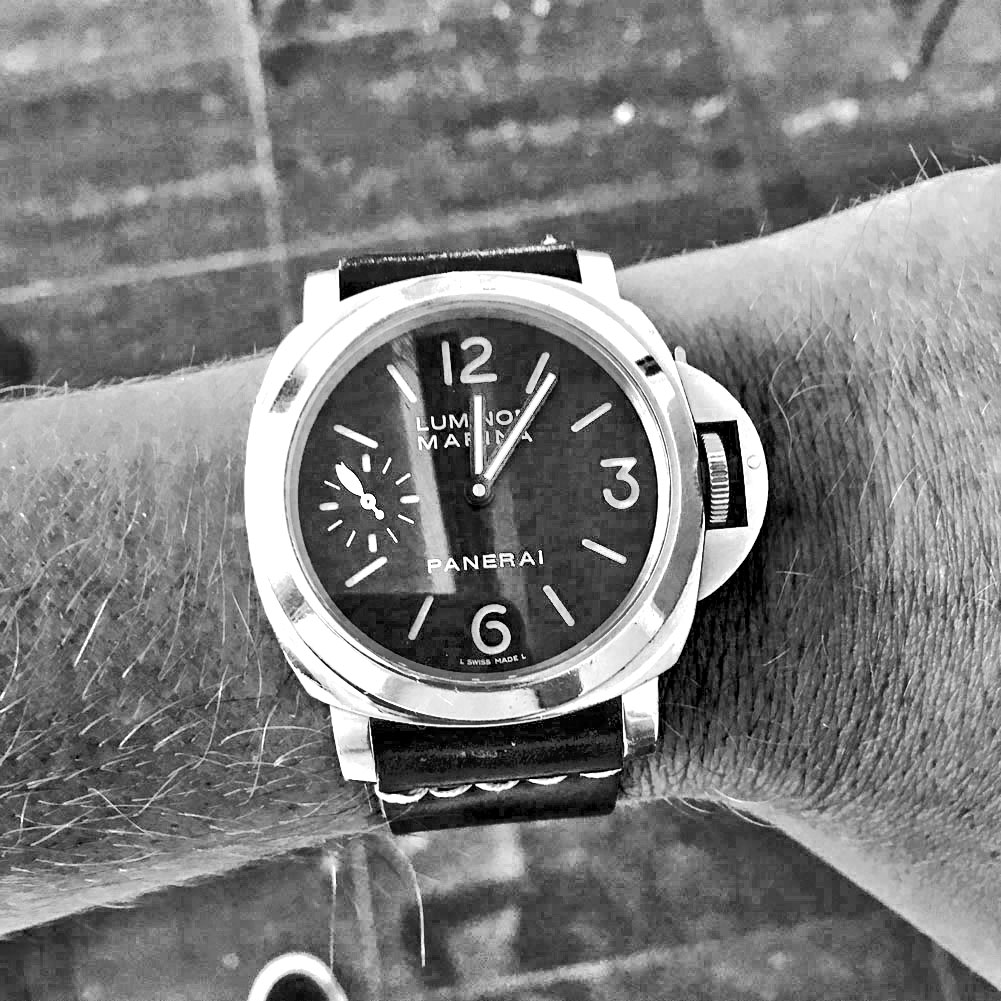 Luminor Marina PAM00111 is a hand-wound COSC certified OP XI Calibre and is based on the tough, easily serviceable and reliable ETA 6497/2. Panerai modified it with a swan's neck regulator, completely redesigned bridges, Geneva stripes across the plates and a power reserve of 56 hours or 2 and a half days. OP XI Calibre features 17 jewels, Glucydur balance, Nivarox I spring, 21,600 alternations per hour / 6 alterations per second and Incabloc shock protection. The OP XI is a certified chronometer according to the COSC, which guarantees the movement to be accurate within -4/+6 seconds within a period of 24 hours’ time.

The early PAM111's of 2002-2005 had "Panerai" repeatedly engraved across the bridges in place of the newer Geneva Stripes. However, they are mechanically the same.

The case of PAM111 watches is water-resistant to 300m or approximately 1000ft. This is one of its most incredible features.

The Panerai case has a nice weight to it. It's not too heavy, and it's definitely not too light. The weight of PAM111 is 109g without strap and buckle and 135g with strap and buckle.

The PAM111 has got a scratch-resistant sapphire crystal formed of corundum and is 3.5mm thick. It has also got an anti-reflective coating that helps reduce reflections. The crystal's edge protrudes just slightly above the polished bezel.

On a PAM111, the dial is matte black and has got oversized luminous numerals and hour indices. The dial reads Luminor Marina as it belongs to the Panerai Luminor family. The word automatic is missing beneath the Panerai name as this watch does not contain an automatic movement. 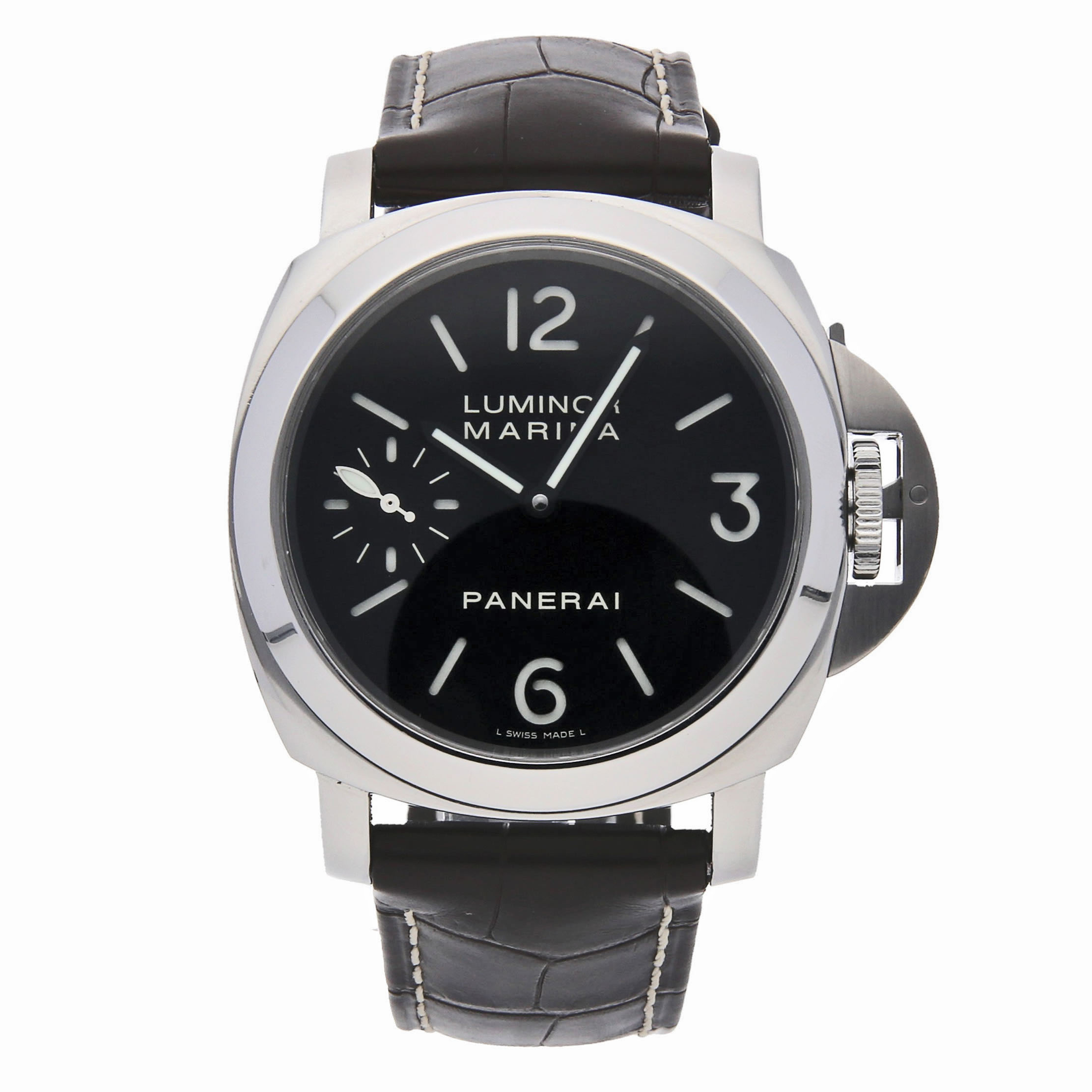 The trademarked crown guard of a Panerai Luminor is unique and instantly recognizable. The crown guard is the only visible part of the watch that is not polished. It has got a brushed finish to help reduce fingerprints/ smudges/scratches, which can be caused while winding the watch on a regular basis. The winding crown is secured by a small lever that must be released before winding the watch or setting the minute/hour hands. It only takes a minute to wind the movement fully.

PAM111 comes with two straps; one brown leather strap and one black rubber strap. They are comfortable and easily fit an average-sized wrist. Each strap is secured by two screws which can easily be removed with the help of the small Panerai screwdriver that comes with the PAM111 watches. Like most Panerai watches, PAM111 doesn’t come with a stainless steel bracelet.

This watch is eye catching with its simple dial, unique shape and awesome crown guard. It is popular among the watch community and you won’t regret owning it. It is distinct in its own way and is much different than most other watches. The Panerai Luminor Marina is a modern, archetypical, and classic Panerai. PAM111 is a timepiece that is extremely versatile. If you want to dress up your Panerai PAM111 with a beautiful watch strap, you can visit DaLuca Straps and get any strap. Whether you want a vintage French ammo strap or a military leather strap, you can find everything at DaLuca Straps.

The PAM111 is a watch you can dress up or dress down. These watches aren’t for everyone, only people with a certain taste will gravitate towards them, but this is definitely worth buying!